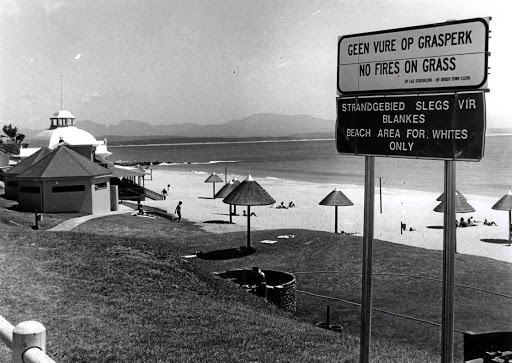 Apartheid signs in Mossel Bay before the dawn of the new era heralded in 1994. Such signs no longer exist, but does that mean a better life for the many in SA, asks the writer?
Image: Times Media

Have we reached the end of politics in South Africa? Francis Fukuyama is still being pilloried for positing the "end of history". Can politics really end?

The simple-minded will hasten to laugh at the very possibility of such a question; for, in line with Thomas Hobbes, they think it must be obvious even to an imbecile that, long after escaping the state of nature, humans cannot live without politics.

We say the "simple-minded" since such common-sensical reasoning has not kept pace with the advancement of thought - meaning that it has yet to come into contact with the conceptual refinements of the modern age.

In the modern age, the conception of politics has gone so far as to presume departure from the Hobbesian state of nature as a long-settled starting point.

Thus, to ask if politics can end is to wonder what is the business of politics in a modern society. Such a modernist question is too nuanced to be answered by the mere presence of Julius Malema, Cyril Ramaphosa or Mmusi Maimane.

What, then, is politics? The most sophisticated and yet simple conception is that offered by the anti-necessitarian philosopher Roberto Mangabeira Unger: "politics as society-making".

In this rich conception, not everything that goes by the name of "politics" is politics.

All manner of clowns can run around thinking that they are engaged in politics when they are, in fact, merely advertising their buffoonery.

To grasp the profoundest meaning of politics, one must think of the period before 1994 in South Africa. Two models of society-making were in contention - the one seeking to maintain a racialised status quo, and the other envisioning a deracialised society.

You can call to mind or expel from the picture the protagonists and personages at the forefront of the pre-1994 drama, but the substance of that era's politics remains.

If that is what we mean by politics - that is, society-making - could we not argue that South Africa has now reached the end of politics?

To contend that politics has not ended would be to claim that the buffoons we call "politicians" are making or remaking our society. How?

To suggest that politics has ended is not the same thing as saying political parties do not launch manifestoes in Durban. The evidence of politics is not the presence of glossy documents called "manifestoes"; it is real change where you and I live.

It could be argued with justification that the first decade of democracy in SA witnessed serious changes in society - from deracialising the formal institutions of our politics to deracialising services that were previously reserved for white people.

All that has now become normal.

If politics is about repeating or multiplying what has already been done, the clowns who call themselves "politicians" could as well go home to bask in the abundant South African sun.

Here is the truth: a young person who believes that "politics" in South Africa will improve his or her life is wasting their time.

Think of white people. Having been purged systematically from state institutions, they went on to establish their own politics in their newly created private sub-state, a new zone that truly remakes society. Who does not want to live there?

The hollowed-out zone that white people have left behind - that of the public state - is a mess characterised by depressing hospitals, dysfunctional schools and collapsing parastatals. Nothing in this dystopian zone is changing society.

Such are the outlines of the theory of the end of politics in SA. Does anyone have a more cogent counter-theory? Let a hundred flowers bloom.