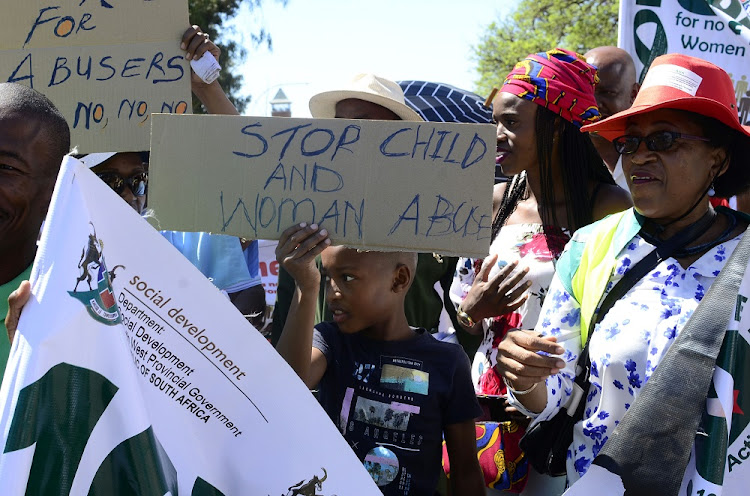 Protesters vent their anger against the scourge of child and women abuse.
Image: Tiro Ramatlhatse

Sexual harassment is a subject that none of us can afford to be facetious about, because it is a life and death matter.

I am writing this piece from Lagos, Nigeria, at the UN-organised Women Africa Dialogue with traditional and religious leaders on ending child marriages and female genital mutilation and cutting – an emotionally excruciating subject on its own.

In a discussion with Pastor S’duduzo Blose, of the Seventh Day Adventist Church, on the interplay between power and sexual objectification of women, he reminded me of the biblical story of King David and Bathsheeba, Uriah’s wife.

The story is usually preached as a simple case of an adulterous relationship between two consenting adults.

However, a deeper look at the text reveals the insidious nature of how power gone rogue can violently destroy a home, lead to murder and most pointedly, how it finds expression in objectification and subsequent rape of Bathsheeba.

From the onset, it is quite clear that David is a king appointed by God; a military hero of Israel with immeasurable financial resources who can decide the fate of his citizens and has soldiers waiting to carry out any of his instructions.

It is these power dynamics that are at play in this tragic tale. Bathsheeba is abducted and taken to David, but due to the unequal power balances, consent is highly unlikely.

David was a king drunk on power who used it to objectify a defenseless female subject in need of his protection.

This rather insightful reading reminded me of an often ignored aspect of sexual harassment, that is less about sex but more about the abuse of power.

We need to arm our children with better tools than resort to violent measures to deal with their problems.
Opinion
3 years ago

Men, because of advantages of privilege that we enjoy over women, are the perpetrators of this harmful practice. At work, men are given leadership roles even when they don’t deserve them at times.

This gives men power which they then use to sexually exploit women, at times blackmailing them with threats to curtail their professional progress and economic future.

These sexual encounters are anything but consensual, quite clear of power gone rogue and being misused for nefarious ends.

Recently, there was an uproar over Johan Rupert’s utterances, in an interview with Given Mkhari, about the work ethic of blacks.

Most black South Africans are hard-working, mostly under adverse conditions, without seeing much change in their economic fortunes. Black poverty is not the result of black laziness, as Mr Rupert and other beneficiaries of apartheid would want us to believe, but it is the result of institutionalised inequality.

I see parallels between the racial inequality and gender inequality that lead to the exploitation of women. Women are blamed for the harassment they endure in work places, with the way they dress touted as the main problem.

Like Rupert, men often blame women for being in vulnerable position, yet they (men) are the beneficiaries in this power imbalance.

It is interesting to note that racism, white supremacy and white privilege all do enrage us, yet we are quite comfortable with their mirror-images, patriarchy, toxic masculinity and male privilege.

Women are often blamed for what men do to them, young girls are challenged to find jobs so that they don’t fall victim to old men who objectify them for money.

This rather absurd way of reasoning, again fails to hold the beneficiaries of these imbalances accountable for their actions.

I recall the rather careless words uttered by deputy president David Mabuza, in which he blames young girls for being vulnerable to rich old men.

I must admit though that there are cases of sexual harassment of men by senior female bosses in work places.

The root cause is the same, of perverted power play. However, the male to female cases of sexual exploitation are more problematic because they usually turn violent and are emotionally destructive to the victims.