Under Trump, America is no longer the champion of freedom 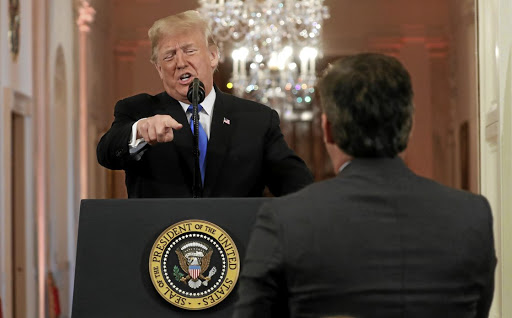 Many people in South Africa laugh when Donald Trump screams at a journalist in the US, thinking that such crazy behaviour has nothing to do with us dark fellows in Africa.

The anti-imperialist sentiment runs very deep in the psychology of most Africans. It is therefore tempting to celebrate when a former superpower, the US, experiences the kind of leadership madness we have long been used to on our continent. Carried away by a strong current of vengeful sentimentalism, most Africans lose sight of the meaning of America in their own political lives.

Under African communalism, the individual has no choice but to submit to the madness of an unelected idiot who usually amasses riches and wives while the rest of society watches. Look at Swaziland, for instance.

In the West, human beings fought to reclaim what Tomas Paine called the rights of man - the idea that the individual is the supreme sovereign, and therefore that the organisation and government of society must be subordinated to the will of the people.

The idea of individual freedom originated in ancient Greece, and was later embraced by most of Western Europe. Under imperialism and colonialism, the Europeans denied colonised peoples of the very fundamental rights of man Europeans themselves held dear. This was a result of racism, the belief that only Caucasians are fully human.

It was America that finally made Europe accept that individual sovereignty goes with national self-determination.

For the past 100 years or so, the US has been the champion of the idea of freedom, though focussing internally. Many black people are embarrassed to admit that they love America. But it is true that most Africans want to live like Americans.

In other words, they want to live freely under political leaders of their choice, to follow their own religious conscience, dress the way they like, and have sex with whoever they chose.

Africans also want freedom of expression. They want to hold their leaders accountable and criticise politicians publicly without being pilloried the way Trump does to CNN journalists.

The question is: If America is no longer the champion of the idea of freedom, what happens to the idea itself?

Some might say: "Let Americans do what they want to do to their own country, and the rest of us will do what we want to do to ours."

That sounds like noble multiculturalist idealism, but the reality is that we humans have always lived according to a predominant imaginative framework.

Imaginative frameworks always have champions. They were imposed under imperialism and colonialism, and they gain currency through hegemonic suasion in a democratic world.

An imaginative framework attains hegemonic suasion by appealing to or aligning itself with the spirit of the individual as the motor behind social affairs and passionate attachments.

Any model that suffocates individual freedom perverts the character of man, and can therefore survive only through arbitrary force. Arbitrary force is the imposition of the will of the few on the many, which is what prevails in China.

And now that Trump is tearing the model of individual freedom in America apart, what other imaginative frameworks are there for humanity to emulate?