The age of the shopping mall is upon us... and white men still rule 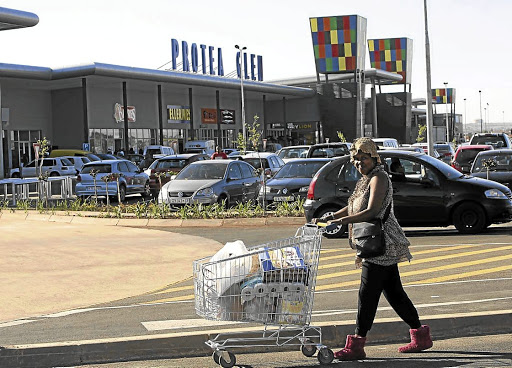 The writer says the shopping malls that are mushrooming in every corner of the country sell products manufactured in China and, as a result, help create jobs.
Image: Antonio Muchave

That South Africa's economy is in deep trouble is obvious. What is little known is the evolution of our economy. How did we get here?

The period between 1652 and 1867 was the age where people relied on farming before the discovery of gold and diamonds.

Other than limited commercial farming in the Cape - which serviced ships headed for the East - there was virtually no market for agricultural produce in SA. People farmed to eat.

White men later introduced education in the first half of the 19th century, excluding the majority of Africans, except for a paucity who received limited missionary education.

During this time mining was the biggest contributor to SA's gross domestic product.

Diamonds, gold, platinum and other minerals were mined and shipped off mainly to Europe.

In the age of the mine, access to education by white children became almost universal. White people owned the mines and Africans provided labour.

The foundations of the third phase, the age of the factory, were laid out by the introduction of both Eskom and Iscor, now known as ArcelorMittal South Africa, in the 1920s.

Corruption the defining trait of SA politicians, from Oom Paul to Juju

Since the time of the Dutch colonists SA has witnessed dubious 'leaders' driven largely by personal gain.
Opinion
3 years ago

From the 1940s onwards, manufacturing overtook mining as the leading sector of SA's economy. AngloAmerican led this process, as it was a dominant player in mining.

The same pattern remained in the age of the factory: Africans were excluded from the education system and the factories were owned and managed by white people. Production was for domestic use, with limited exports.

The age of the factory was brought to an end by the imposition of sanctions in the dying years of apartheid.

The first decade of democracy was a period of stabilisation through the introduction of new policy instruments. The growth that followed was chimerical.

Essentially, the shopping mall is what the governing ANC introduced. Malls started mushrooming in the suburbs and townships.

However, there are two problems with the ANC's malls. First, just like the previous governments, the ANC government has not invested in the education of black people and, as a result, the shopping malls remain under the ownership and management of white men. Nothing has changed.

The second problem with the shopping malls is that almost everything purchased is made in China.

For anything to be "Made in China" means South Africans use their money to create jobs in China. While most of us would like this to come to an end, the problem is other than white people, almost all black people have no advanced engineering skills, making it impossible for them to set up a factory for manufacturing purposes.

As it was the case under colonialism and apartheid, the black man is still a jobseeker, hoping to be employed by a white man.

White people currently have more than R1-trillion of uninvested cash while black people remain unemployed. Who, then, will employ uneducated black people?

President Cyril Ramaphosa has been globetrotting, trying to convince foreign investors to pump their money into our ailing economy. But why must these investors do so if white South Africans don't want to invest their money in their own country?

Here's the truth: the
so-called stimulus package unveiled by Ramaphosa will produce nothing because the fundamentals - such as skills and confidence by those with money - are not in place.

Welcome to the age of the shopping mall!