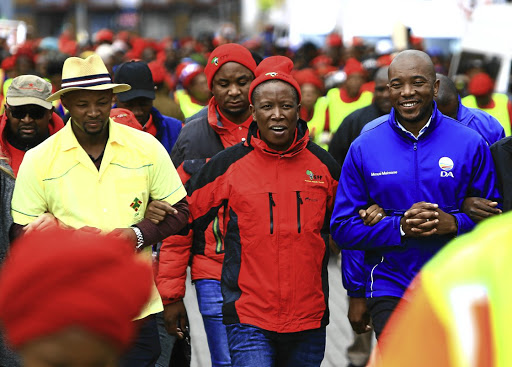 The relationship between Julius Malema's Economic Freedom Fighters, centre, and Mmusi Maimane's Democratic Alliance is as good as a marriage of convenience.
Image: Simphiwe Nkwali

South African politics is never boring. Last week we were treated to yet another drama; this time around it took place in the theatre of coalition clowns.

The drama began in the Nelson Mandela Bay and ended in Tshwane. The accusations and counter-accusations are very confusing. What is clear is that politicians are jostling for power. There are three main actors involved: the ANC, DA and EFF.

Since its relegation to opposition benches in August 2016, the ANC has been waiting restlessly for the EFF to change its heart.

Governing like someone hanging on a piece of hair, the DA has been running around like a headless chicken, sleeping with one eye open to see what an untrusted partner does when witchcraft hour strikes.

For its part, the EFF has been wagging its tail, amused by the tiptoeing of the puppet governments the party has installed in big metros.

Only a super beautiful woman knows the feeling she gets from a stampede of men who keep on trying their luck. The EFF must have been enjoying being seduced by a desperate ANC seeking to reclaim power.

The whole thing looks messy, though. As political bosses shuffle and reshuffle each other, South Africans are not entertained by the circus of knaves vying for crude power.

Julius Malema was right to tell eNCA that he must not be blamed for the messiness of South Africa's new coalition politics.

He did not create it.

It is the result of power spread by voters. Malema is simply a good dribbler in a game he did not design.

As the coalition drama unfolds, the Thuma Mina make-up continues to disappear from the face of the ANC.

Last week, a rowdy crowd from Mpumalanga marched to Luthuli House to demand the disbandment of the party's provincial executive committee, which has failed to calm waters at Kanyamazane. The party in the North West is as broken as KwaZulu-Natal is untrustworthy.

On the other side, the DA seems to enjoy committing suicide. It looks like there are white people who have decided to take back their party. The DA seems set to become a pure white party, after its predictable decline in 2019.

Steady as it may appear, the EFF's internal stability hangs on the force of one man - Malema. While the party has re-energised the most hopeless among black youth, there is a real risk that the EFF might, in the end, leave its supporters worse off when the party has demolished the entire South African economy - look at Zimbabwe.

Regardless of your standpoint, the future of South Africa's politics looks bleak. There are no signs that the quality of our public education, particularly in black schools, is about to improve. Even students at the University of Limpopo want difficult exams to fall, so that they can pass and go back to widen the reservoir of the unemployed. Who will employ such worthless graduates?

On their part, ordinary people are taking matters into their own hands, having been failed by an incompetent government that cannot remove expired tins of baked beans from the shops of foreigners who couldn't care less about the health of South Africans. Heartless foreigners can poison us without our government doing anything.

As our national circus continues, the world is not waiting for South Africa. Scientists out there are busy experimenting with the best robots to replace millions of workers on factory floors.

We will know the commission has been a success when those who have looted our resources are behind bars.
Opinion
3 years ago

In the future, machine brain power will replace human brawn power almost completely. The most honest human beings will avoid politics, which will be the domain of scoundrels and University of Limpopo's unemployable graduates.

From 2024 onwards, South Africa is likely to be accepted by the international community as a politically unstable strategic country in the hands of crazy coalition political entrepreneurs. The ANC will leave behind thugs fighting for its colours.

As for us ordinary people, we must fasten our seat belts. The ride will be very bumpy. If you are young and hope for a better future, demand more difficult exams and read far more than what your teachers prescribe.

If you are unemployed and poor, you will be wasting your time to expect politicians to help you.

Welcome to the future.