Laughter is cold comfort as SA spirals down an immoral abyss 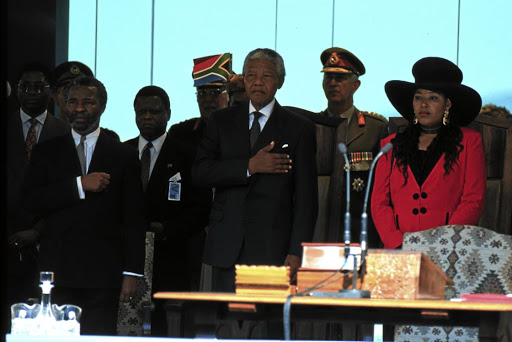 SA's political discourse and how the past influenced the future will be traced through the presidencies of Nelson Mandela, Thabo Mbeki, Jacob Zuma and Cyril Ramaphosa.
Image: David Sandison

It is now almost a quarter of a century since the dawn of democracy in SA.

This milestone necessitates a serious relook at the evolution of the moral character of our politics.

Posterity will trace our current political life using presidents as markers of our time. Historians will refer to the age of Nelson Mandela, the era of Thabo Mbeki, the period under Jacob Zuma and so on.

We shall see that the high-mindedness of a generation of leaders is captured in history as the character of an epoch. We must therefore expect Donald Trump's idiocy in the US to go down in history as the lowest point in the evolution of its political psychology.

In South Africa, the first five years of democracy were a time of high moral ground. The dignity of Mandela was interpreted by the rest of the world as a manifestation of a kind of exceptionalism on the part of black South Africans. Global observers were not wrong in drawing such parallels, for black people themselves walked with inflated chests in their proud association with their moral giant.

Even when Mandela divorced, the whole thing was handled with a dignity so untypical of the dirty business of divorce. Thus, South Africans continued proudly to refer to Mandela as their "tata", and Winnie as their "mama".

Mbeki's era was less a time of moral gravitas than a period of intellectual heft. Suddenly, a short black man in the presidency demonstrated to the whole world that people with a dark skin can think. Still, this intellectualism was weaved with a deliberate moral effort that seemed to result from decades of deliberate monkish moulding.

The day he took over Mandela's "ugly" shoes at the Union Buildings, Mbeki's smouldering pipe disappeared from the public eye. Such consciousness was reminiscent of the morality of yore.

And then the gates of hell were thrown ajar the day Zuma clutched his "machine gun" in his armpit and walked into the Union Buildings.

As he readied himself for our country's highest office, Zuma's preparations included recreational sex with an HIV-positive woman - knowingly.

In this "ennobled" presidential game, a shower gained the kind of curative powers usually reserved for medical science.

The shocking trans- formation from private to public parts of a minister that we have witnessed over the past few days marks the highest state of our politics' moral rot.

That such a moral wreckage is still in the cabinet as you read this column is ample evidence that ours is truly a hollow society.

As people continue to laugh about it in shebeens, and as cartoonists redraw the previously private and now public part to elude the cleverest of children, the moral dignity once associated with our politics sinks deeper into the mud of the bundles of worthlessness we call "ministers".

Those who dare raise a finger are referred to the Bible: "Let he without sin cast the first stone." People then say: How could the president act? Is his bag not heavy with sins? Are there no blesser-blessee stories somewhere?

Our troubles are worse: even pastors now sit before judges in court to answer serious questions about the very same "fruit" that led to Adam's and Eve's expulsion from the Garden of Eden.

Who, then, will refill our society's moral emptiness? Cry the beloved country.

The EFF is suing Prince Mashele, a political commentator, for defaming the party and its leader Julius Malema.
News
2 years ago
Next Article