Nene hailed as hero while fooling South Africa for years 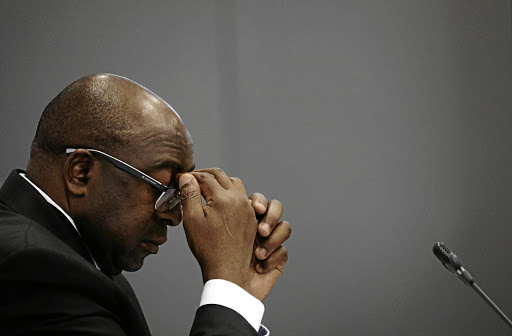 Former minister of finance Nhlanhla Nene must be investigated by the Hawks to try and find whatever money he may be hiding inside or outside SA, says the writer.
Image: REUTERS / Siphiwe Sibeko

When Jacob Zuma fired Nhlanhla Nene at night in December 2015, I and other activists telephoned each other the next morning.

We were gripped by an intense sense of grief, the kind you experience upon hearing of a serious personal loss - such as the death of a close relative.

It felt like our country had died. The backdrop to this episode was public speculation about an impending nuclear deal with Russia, a deal we were certain would collapse the entire economy.

By this time Zuma had made a name for himself as one of Africa's stupidest kleptocrats, willing and happy to steal even the future of unborn babies. The Guptas had already established themselves as the real robbers running the state.

Our analysis was that, cornered as he was, Zuma was in suicide-bomber mode; he could detonate the country any minute. Thus we felt it was better to die fighting than to be killed while running away. It is this sombre background that thrust people like me who had carved out a stable professional space in academia back into Struggle mode.

The mood among activists was that of preparedness to fight. Some of us were already marked men, followed by spies wherever we went, and stopped by unmarked police vehicles to breathalyse on our way home from parties. Our families and friends were rightly concerned about our security. We did not care, for the fire of patriotism flamed in our stomachs. It couldn't be dowsed. Those of us who are relatively young got a taste of what the generation of Mandela must have felt like under the brutality of apartheid.

Before December the media had been speculating that Nene was refusing to sign the nuclear deal. He therefore loomed large in our minds as a national hero who needed support. That is why we called each other when he was fired.

In a matter of hours, we had agreed to meet in Braamfontein - to plot a #Zuma Must Fall campaign, hoping to save South Africa from a mad thief in the presidency.

Such was the beginning of many activities. We met in Soweto, Pretoria, Cape Town, and encouraged people across the country to organise themselves. We marched to the Constitutional Court, the Union Buildings and parliament.

There was a climate of fear. The rich people we approached for donations gave us the run-around. Those who contributed some cents did so under strict cover. Poor as some of us were, we took the little left on our credit cards to support what we thought was a worthy cause.

We did not know then that we were running around to defend and support a senior member of the Guptas' gangster paradise - the crook himself, Nene.

Standing ovation goes to Nene for his bravery

Nene remains a true leader regardless of his involvement with the Gupta brothers; he saved SA.
Opinion
2 years ago

The Guptas were very generous in filling up the pockets of the stooges who agreed to participate in state capture. We know they promised Mcebisi Jonas R600m. What we don't know is how much Nene was given for agreeing to play a part in state capture.

The only thing Nene has told the country is that he met the Guptas frequently. But he did not come clean as to how big his bag of dirty money was. That is why he must never be commended for "resigning". There is no nobility in the partial confession of a crook.

Nene deserves two things. He must be condemned for fooling South Africans for all those years. He must also be investigated by the Hawks to try and find whatever money he may be hiding. Nene's movements must be watched closely, just as crime intelligence must follow Duduzane Zuma for 24 hours every day.

There must be severe consequences for people who dupe the public, so that other would-be liars are made to fear the harsh repercussions.