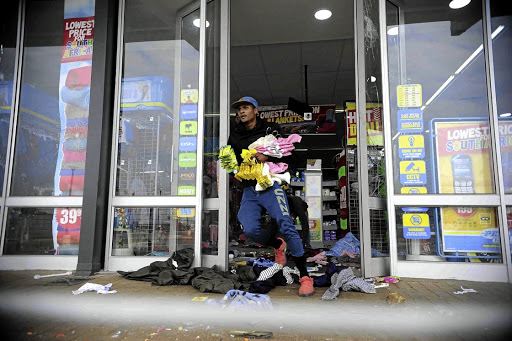 Whether people are protesting against poor service delivery, or are upset that trains are late, it is to be expected that violence, including looting, will accompany the grievance. /Thulani Mbele

It seems we are becoming a nation that resorts to violence at the drop of a hat.

We see it on television and other media on a daily basis, as if it is a national sport or perverse entertainment.

Violence is so commonplace that, even when we see it on television, we are no longer shocked or even want to know what it is about. And that is scary.

If it is not a brazen cash-in-transit robbery in broad daylight, it is taxi people shooting at one another and leaving corpses in their wake.

If it is not parents and their children protesting and burning tyres, it is residents stoning cars and having running battles with the police because of lack of housing, water or electricity.

One of the disconcerting trends of late is the sight of children looting during protests. What are we teaching them? That it is okay to steal other people's property?

Most of us have lost count of the politically motivated murders of councillors in KwaZulu-Natal. Then you have speeches at funerals decrying the scourge and promises of action, but the murders of public representatives continue.

The national department of higher education and training is set to roll out the first-ever gender-based violence policy in institutions of higher ...
News
3 years ago

The vilest and most sickening phenomenon is the rampant violence against women and children. These vulnerable members of our society who need societal protection the most, and who many nations in the world would go to war to protect, are violated, hurt, abused and killed wantonly.

A combination of many factors have been fingered for the growing prevalence of gratuitous violence in our society.

Firstly, some say the dislocation of society caused by the rapid movement of people who have been prevented from developing naturally by the oppressive past restrictions contribute to this. The cohesion of communities where people knew their neighbours is frayed by this constant movement, creating communities where people are strangers to one another.

Secondly, there are people who believe that the appalling levels of poverty, coexisting with filthy levels of opulence and decadence, are producing a toxic mix that generates resentment. Although there are societies elsewhere that have serious levels of poverty but are not characterised by violence anywhere near ours, this is a factor we cannot discount.

Thirdly, the scale of impunity is staggering. We see people burning, looting, destroying and hurting others but there are no arrests, court cases or appropriate punishment. In this regard, our state is very weak-kneed.

Whatever the weaknesses of Kim Medupe, the mayor of Koster in North West, there was no justification for burning her house and vehicles.

Similarly, there was no justification in the torching of schools in Vuwani, Limpopo, because some people were peeved over municipal boundaries.

Unless there are consequences for wrong-doing, gratuitous violence will continue to haunt us.

We need to focus on restoring family values in Mzansi

The UN was determined to encourage better life standards and social progress of families across the globe.
Opinion
3 years ago

Fourthly, there is a tendency to reward people who burn things and throw stones during protests - with authorities succumbing to the demands of violent protesters. The message being conveyed is that violent protests pay.

Then there is the fact that the dominant political practice promises too much and delivers too little.

Political leaders run around the country, especially during elections, promising communities things they know cannot be done. They make extravagant promises to get votes, but keep away when they are unable to deliver.

Contributing to the mix of factors is drug taking. It is hard to imagine how anybody can commit certain violent acts unless they are high, drunk or mentally disturbed. How does a normal person rape a child or his own grandmother who is in the twilight of her life?

If we want our society to progress and prosper, we must banish gratuitous violence from our midst.