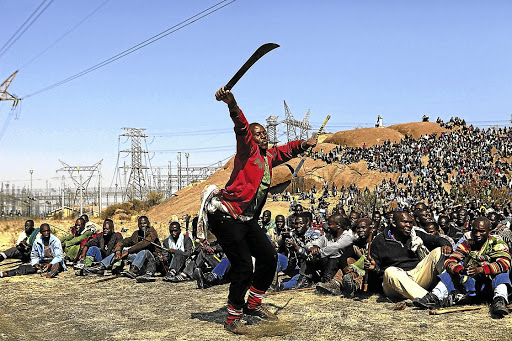 While they bravely put up a fight for decent wages, the striking Lonmin mineworkers at Marikana also killed fellow workers, only themselves to be killed by police firepower. /Alon Skuy

The 19th, 20th and 21st March were three poignant consecutive days for some of us. They reminded us sharply about the enduring pain of black people.

On Monday March 19, former deputy chief justice Dikgang Moseneke released his findings on the Life Esidimeni probe that once more recounted one of the most callous and shameful episodes in our country. What was incomprehensible was that the atrocity was perpetrated by people who included qualified medical doctors.

Moseneke did his best to comfort the families of the victims and awarded them financial compensation.

But for most of us, the horror of Life Esidimeni will remain with us for as long as we live.

Then, on March 20, celebrated Zimbabwean author and activist, Tsitsi Dangarembga, delivered the Mapungubwe Institute for Strategic Reflection annual lecture at the University of Johannesburg. Tsitsi burst onto the literary scene in 1988 with the publication of her book Nervous Conditions.

In her lecture, Tsitsi touched on many things that cannot be handled in this short piece. But her allusion to the trauma and pain that black people have endured is of immediate relevance to the goings on in our country.

Even 366 years since the arrival of Jan van Riebeeck in South Africa, the same demons which tore black people apart are still firmly established.
Opinion
4 years ago

Basing herself on events in her native Zimbabwe, she demonstrated the continuous trauma that black Zimbabweans have endured over centuries. She traced the intra-ethnic wars among the different Shona groups, the wars between the Shonas and the Ndebeles and then the strife during the invasion by the British colonisers.

The war of liberation was itself extremely brutal as well as the strife and suffering that continued after the attainment of liberation.

This continuous suffering has produced what she calls nervous conditions. She revealed that up to a fifth of Zimbabweans suffer from one form of mental health problem or the other. It was not surprising that the figures for South Africa and Zimbabwe in the mental health sphere are comparable.

While racist colonisers have long propagated the sub-humanity of black people, and therefore deserving of cruel treatment, black people have, to a degree, become inured to the suffering of a black body.

Why, after the attainment of democracy would a black government slaughter its people with machine-gun fire as it did in Marikana?

Why did the workers themselves murder one another the way they did?

If the government, the police and the miners did not own the platinum coming out of the mines, what did they kill one another for? Is it not because they have internalised the insignificance of black lives?

During the Sharpeville commemorations on March 21, the similarities of atrocities against black people by the racist regime and the present government were laid bare. The Sharpeville massacre, Marikana, Life Esidimeni and others were mentioned in the same speeches.

The deputy president of the country could not even properly name Lumka Mkhethwa and Michael Komape, the two six-year-olds who drowned in their school pit toilets.

Then there is Vuwani where black people burned the schools their own children attend. Taxi people murder one another for just a few rands. The list goes on.

Tsitsi has a point. The many centuries of brutalisation of the black body has inured even black people to the suffering and pain of black people.

We need to rid our psyche of this kind of mentality.

In particular, we need a black leadership that does not only mouth lofty concepts about capitalism, socialism and similar isms, but one that is conscientised on the dignity, value and worth of the black body.