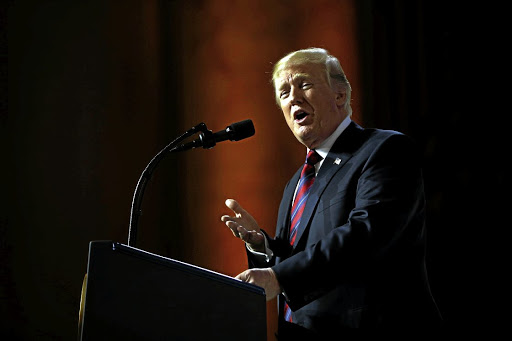 US President Donald Trump is the main reason that the world of diplomacy is fraught with uncertainty, says the writer. /Al Drago/REUTERS

In the not so distant past, before Donald Trump happened, there was a modicum of respectability in international discourse.

It was by no means perfect, but the nations of the world, at the UN and its agencies, could engage in fairly dignified give-and-take diplomatic activities.

There was some predictability and logic in international relations, which in turn made multilateralism a worthwhile exercise.

Trump, armed with his crude America first "doctrine", is ripping all that apart. The world of diplomacy is fraught with uncertainty and dangerous fragmentation.

The most disconcerting thing is Trump's lack of respect for international agreements.

Nobody can trust that if the US puts its signature on the dotted line that it would honour its commitments.

He insulted the North Korean head of state at the UN General Assembly session recently in front of leaders of the world. In front of all those world leaders and the media fraternity, he threatened to wipe North Korea off the face of the earth. That's bullying in its crudest form.

He pulled the US out of the Paris Climate Change Agreement which his country had committed itself to. He did the same with trade agreements the US had with its North American neighbours and another with Pacific and Asian countries.

Against long-standing UN resolutions and international understanding, he unilaterally declared Jerusalem the capital of Israel and moved the embassy of his country there.

Protests by the Palestinians and others all over the globe were brushed aside. The massacring of unarmed and peacefully protesting Palestinians in Gaza and elsewhere by Israeli soldiers was blamed on the victims of the shooting by both the US and Israel.

Since when is the shooting of unarmed people with live ammunition by an army a legitimate act of self-defence?

Unilaterally, the US has just pulled out of the nuclear deal it negotiated and signed with Germany, France, Britain, China, Russia, the EU and Iran.

The UN Security Council ratified the deal. Protestations and pleadings by the US's alliance partners fell on deaf ears. The Europeans in particular, who have always considered the US as a dear and trusted friend, are exasperated, frustrated, confused and alarmed by the erratic Trump.

It is common sense that multilateralism in particular and international relations in general operate on the basis of trust, honour, respect and integrity.

Once these variables are absent in international interactions, relations among countries of the world, at bilateral and multilateral levels, become difficult and unpredictable.

The U.S. decision to move its embassy to Jerusalem encouraged Israeli forces to kill dozens of Palestinian protesters on the Gaza border.
News
4 years ago

Who would like to make any agreements with America if that country reneges on agreements it has signed with other nations? Considering that the US is an economic and military super-power, this creates a dangerous environment for world peace.

The Jerusalem and Iran deal decisions, and the bellicose rhetoric around these, suggest that the US and its surrogate Israel are spoiling for a fight in the Middle East.

It would not be surprising if these two countries conspire to start a war in that region, specifically against Iran and its allies.

Taking into account the friendship between Iran and Russia, and the tense relations between the West and Russia, is it conceivable that in the event of such a war, the Iranians and Russians might be on the same side?

There has been some loose talk to the effect that World War 3 would start in the Middle East. Could this be it? With a bully in the White House and a fragmented international order, are we perhaps facing the danger of a world war?