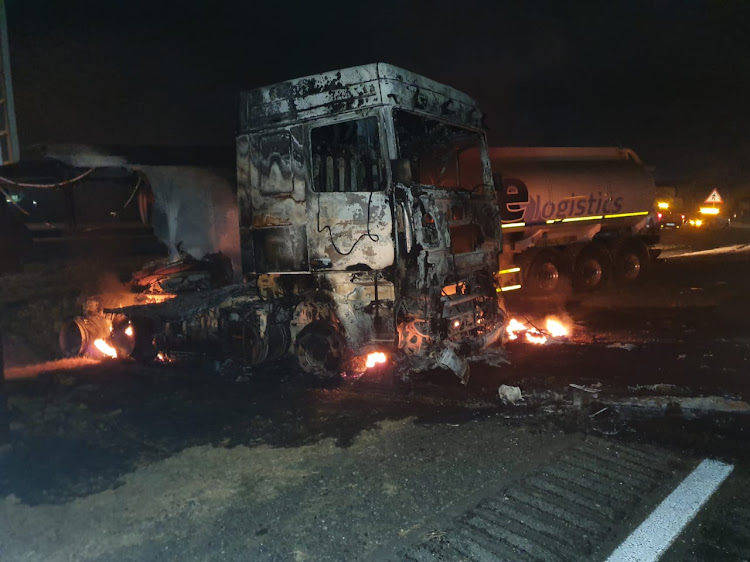 The consequences of the violent protests that plagued KwaZulu-Natal on Friday spilt over into Saturday.

Police have had their hands full since former president Jacob Zuma's incarceration this week. Crowds took to the streets in protest.

The N3 near Mooi River remained closed on Saturday morning after vehicles, including a tanker and a car carrier, were set alight on Friday night.

Thania Dhoogra, the operations manager of the N3 Toll Concession (N3TC), advised motorists to use alternative routes while recovery and cleanup operations continued.

N3TC manages a 415km section of the N3 toll route between Cedara in KwaZulu-Natal and Heidelberg in Gauteng.

“Cleanup operations are now under way on the N3 toll route in the vicinity of the Mooi toll plaza in KZN following last night’s violent protests,” said Dhoogra.

“Protesters torched 23 heavy motor vehicles on the N3 near Mooi River, including a tanker carrying a highly inflammable substance (methyl ethyl ketone) and a car carrier.” 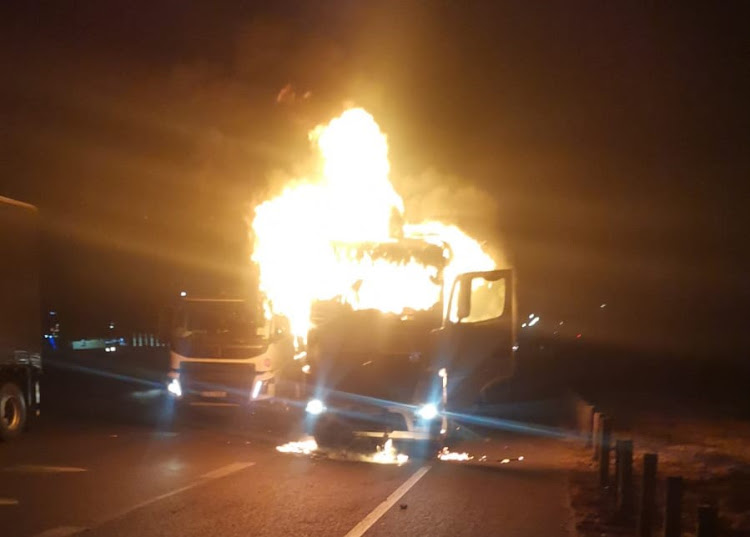 Some of the vehicles that were set on fire during protests on the N3 on Friday night.
Image: Twitter/TrafficSA

Dhoogra said traffic delays would continue throughout the day and warned motorists to be vigilant.

“Road users are warned to continue to expect slow-moving traffic and heavy congestion throughout the day. N3TC extends its gratitude to all law enforcement officers and emergency services who worked tirelessly throughout the night to restore law and order, and who are now continuing to assist with cleanup operations,” said Dhoogra.

BREAKING- Protesters on the N2 Mtubatuba have a set a truck 🛻 one fire 🔥 #FreeJacobZuma pic.twitter.com/B0YMHxCnxd

The statement added: “These police officers will be deployed along major routes and key points within each district to deal with criminal elements that are responsible for recent incidents of lawlessness.”

Police said they would ensure the regulations aimed at curbing the spread of Covid-19 are adhered to.

“We will be focusing on enforcing the regulations of the Disaster Management Act, more especially the convening of illegal gatherings as well as those that are not observing curfew regulations.

#ShutdownKZN The aftermath! The N3 in Mooi River set to remain closed for the better part of the day. Trucks were torched during #ShutdownKZN protests for #FreeJacobZuma. #eNCA pic.twitter.com/EPsOD5fP6L

“A large number of people have already been arrested for incidents of criminality witnessed in the province yesterday and cases have been registered to trace and arrest those that still have to be arrested.

“A number of incidents were witnessed today of people who are opportunistic and used today's protest to enrich themselves by looting shops and other businesses. Police will not tolerate such incidents of criminality and will be dealing harshly with those found flouting the law.”

The KwaZulu-Natal government has called for calm amid growing threats to shut down the province through violent protests over the incarceration of ...
News
1 year ago

A screengrab that is circulating showed the video on Duduzile Zuma-Sambudla’s Twitter page but was later removed.
News
1 year ago

KZN paramedics from the VIP medical services had to alter their route on Friday when a group of protesters believed to be part of the “Free Jacob ...
News
1 year ago
Next Article