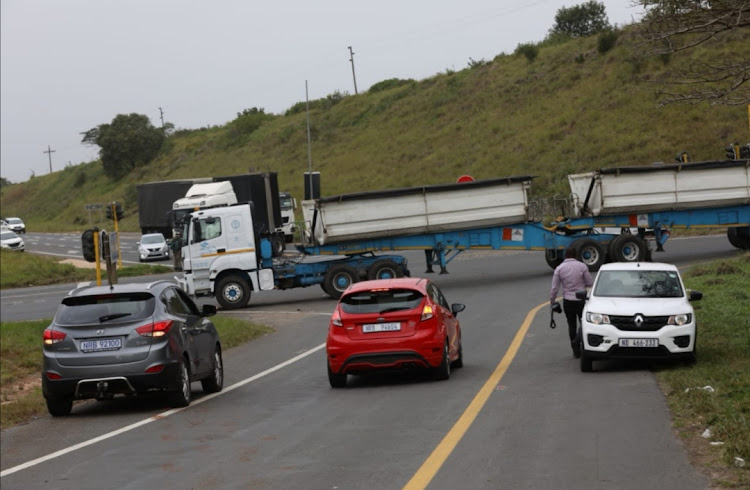 The KwaZulu-Natal government has called for calm amid growing threats to shut down the province through violent protests over the incarceration of former president Jacob Zuma.

On Friday, several incidents were reported to have taken place in the province including the closure of the N2 and N3 highways, and malicious damage to property.

The M7 which is a strategic cargo transit route to the port of Durban and other provincial and municipal links were also affected.

“Several vehicles were reportedly stoned and millions [of rand] worth of public infrastructure damaged resulting in many commuters not being able to reach their places of work,” the provincial government said in a statement.

It said those behind the protests were believed to be people who were opposed to Zuma's incarceration.

KwaZulu-Natal premier Sihle Zikalala called for discipline and for protesters to express their anger through peaceful means.

“We understand the extreme anger of the people who are protesting. As a country and province we find ourselves in a very unusual and unique situation wherein we are dealing with the arrest of a former president of the ANC and the country. We are therefore dealing with very challenging times. However we call on those who are protesting to do so through peaceful means and to avoid violence and destruction at all costs.”

KZN paramedics from the VIP medical services had to alter their route on Friday when a group of protesters believed to be part of the “Free Jacob ...
News
6 months ago

He cautioned about the impact of illegal gatherings under level 4 of the lockdown on Covid-19 infections.

“Health experts have also warned that the rate of infection in the province has now hit double digits in the majority of the districts,” said Zikalala.

“We have been thoroughly briefed on the security situation on the ground and we can assure the people of the province that all law-enforcement authorities are now on high alert and are addressing the incidents as they evolve. Again we must not allow the current situation to divert us from our known culture of respect and ubuntu.”

He said the provincial government would urgently convene a crime, justice and security cluster (JCPS) meeting to further assess the situation and review strategies in dealing with the threats and violence.

Police spokesperson Brig Vish Naidoo said the police were working closely with the National Prosecuting Authority (NPA) to formulate charges in respect of the protest actions which included malicious damage to property, arson, looting and the blocking of and damage to national roads in and around Durban.

“These actions have clearly emanated from the calls that were made by certain prominent persons via the mainstream and social media space,” Naidoo said.

“These prominent individuals will most likely be the ones facing these charges and they will be called to account for these and any other crimes that may occur in the future,” he added.

“These threats and actions are unlawful and amount to sabotage and sedition and have the potential to cause much economic disruption,” said Agri Limpopo CEO Deidre Carter.

“Right now, we are in the midst of our citrus export season and after receiving various calls from our members we conducted a quick survey to ascertain and validate the extent of our concern. There are currently 547 links with a fresh produce value of R247m en route to Durban either via the N2 or N3,” she said.

The organisation called on the government to:

Zuma is no coward, it's only a matter of time before he returns to stand for the truth — Women's League

The imprisonment of former president Jacob Zuma signified a “very painful chapter” for the ANC Women's League in KwaZulu-Natal, it said on Friday.
News
6 months ago

Judge Mnguni blasts Zuma as defiant, scandalous against the judiciary

Zuma had approached the high court and pleaded for the interdict on Tuesday after he failed to hand himself over to serve jailed time as ordered by ...
News
6 months ago

Ahead of being driven off from his Nkandla homestead on Wednesday night, former president Jacob Zuma informed "pained" leaders of his support group ...
News
6 months ago
Next Article