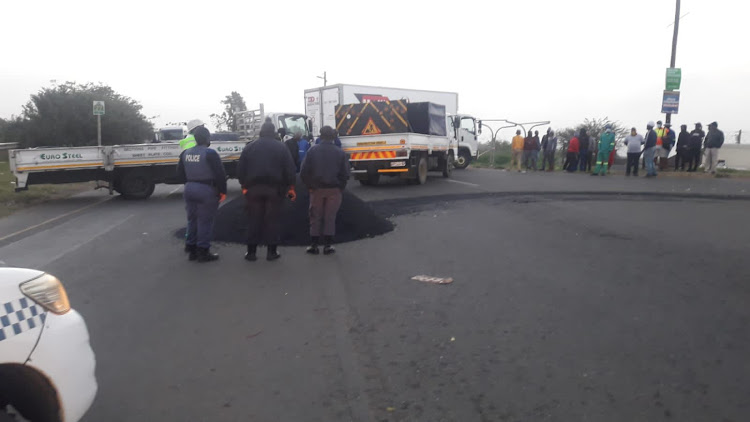 A video of someone taking potshots at an election poster of President Cyril Ramaphosa made the rounds on social media on Friday as KwaZulu-Natal was shut down as part of a violent “Free Jacob Zuma and Shutdown KZN” campaign. 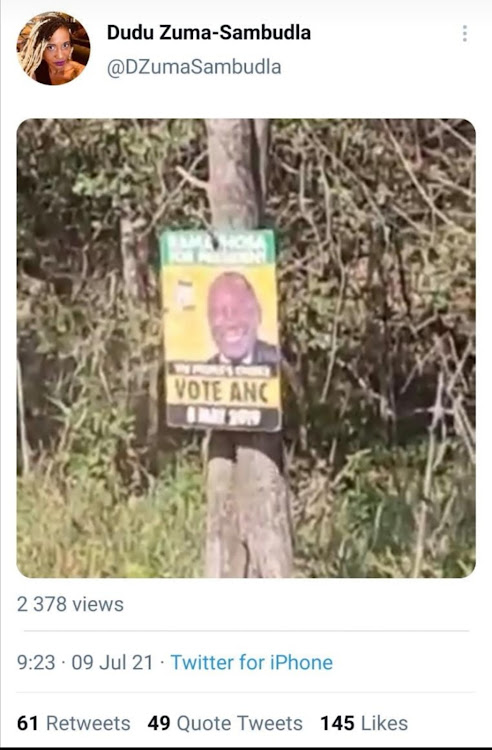 A screengrab of a video, purportedly posted on Duduzile Zuma-Sambudla's Twitter account, in which an unknown person fires shots at an election poster featuring President Cyril Ramaphosa's face.
Image: Suppplied

A screengrab that is circulating showed the video on Duduzile Zuma-Sambudla’s Twitter page but was later removed.

The video, which TimesLIVE has seen, shows an election poster pinned to a tree. A shooter, whose identity is unknown, can be heard firing rounds at the poster.

The post received 2,378 views and was shared and liked several times.

The presidency referred queries about the video to the police.

Zuma-Sambudla’s Twitter feed also includes reposts of videos and pictures of protests and disruptions unfolding in KwaZulu-Natal and surrounds, with the caption: “We see you!!! Amandla”.

Police were under pressure when responding to several fiery protests, disruptions to traffic and truck blockades since the early hours of Friday morning from Empangeni in the north coast to the province’s south coast.

Premier Sihle Zikalala’s office said it would soon issue a media statement “on the protests and security situation in the province to avoid responding to isolated incidents, including social media posts”.

Police minister Bheki Cele, who was in Empangeni to address a multidisciplinary parade of members being deployed to several northern parts of the province, said 13 people had been arrested following the blockading of traffic in the area.

WATCH| Trucks have been used to block part of the R34 highway between Empangeni and Richards Bay. An official of uMhlathuze municipality has confirmed that the protests are related to former president Jacob Zuma's incarceration. @TimesLIVE

Police ministry spokesperson Lirandzu Themba said minister Bheki Cele would not be in Nkandla on Wednesday, the deadline by which police were meant ...
News
1 year ago

Zuma 'on his way' to hand himself over for imprisonment, says foundation

Former president Jacob Zuma is "on his way" to hand himself over to prison authorities in KwaZulu-Natal, his foundation confirmed.
News
1 year ago
Next Article