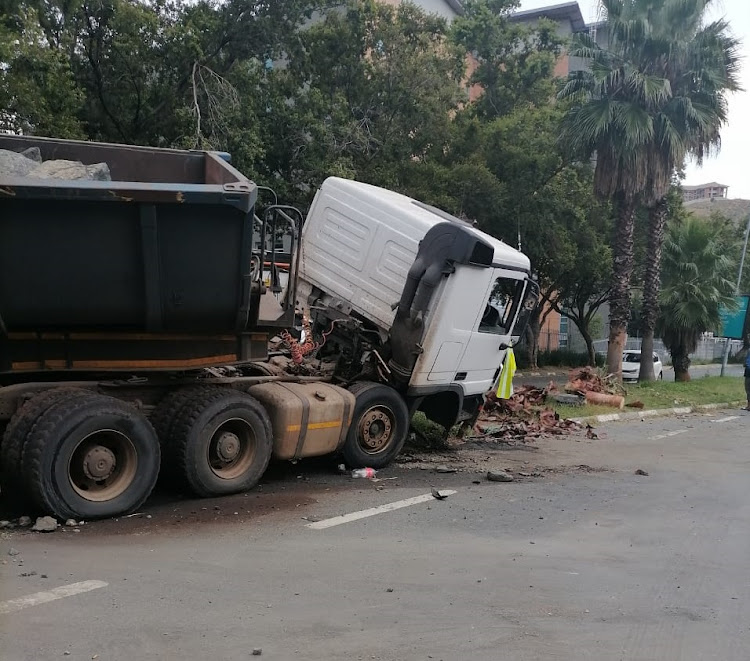 The Johannesburg metro police department said the truck, which was carrying chrome from Rustenburg to City Deep, crashed into the rear of a van and SUV vehicle which were stationary at a traffic light.
Image: JMPD

A truck driver has been arrested for causing a major accident on William Nicol street close to Life Flora Hospital in Roodepoort, the Johannesburg metro police department said.

JMPD spokesperson Snr Supt Wayne Minnaar said the truck, which was carrying chrome from Rustenburg to City Deep, crashed into the rear of a van and SUV vehicle which were stationary at a traffic light.

He said the truck failed to stop on the steep downhill road.

He said the driver of the SUV only sustained minor injuries.

Three killed as truck crashes into car, pedestrian and school building in KZN

Three people died on Thursday morning on the KwaZulu-Natal south coast when the driver of a tipper truck lost control of the vehicle, paramedics said.
News
10 months ago

The crash happened at around 10.30am on Saturday.

Minnaar said the driver of truck was arrested and charged at Florida police station for reckless and negligent driving and for transporting chrome without a permit.

“William Nicol street has a very steep decline and there are signs which prohibit trucks of five tonnes and above to use that road.

“There have been complaints received from the Florida Blockwatch recently that big trucks were disregarding those signs and JMPD officers have issued dozens of fines of R500 each to drivers of big trucks who disregarded the signs.”