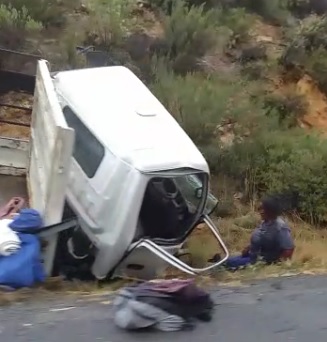 Two more female farmworkers have died as a result of a truck accident on the N1 in the Western Cape.
Image: Screenshot

The number of lives lost in a truck accident near Worcester in the Western Cape on Monday has increased to three.

Initially one death was confirmed, but land reform minister Thoko Didiza said she had “learnt with shock of the death of three farmworkers in an accident that injured more than 20 people”.

The four-ton truck was reportedly carrying more than 30 female farmworkers when it crashed, catapulting them onto the N1. The driver allegedly lost control of the vehicle.

ANC shadow MEC for agriculture Pat Marran told TimesLIVE on Monday the truck was carrying farmworkers when it crashed at about 6pm.

It had been travelling from Meerlust farm in De Doorns to Worcester via the N1.

Images of people crying while others lay motionless on the side of the road were circulating on social media after the crash.

Didiza has called for intervention on how farmworkers are transported.

“The death of one farmworker is one too many. We need to avoid such accidents at all costs by looking at how to better their transport conditions,” she said.

She conveyed her condolences to families who lost loved ones in the tragedy.

Farmworker Adelaide Mhlongo says her circumstances at home forced her to break the lockdown regulations and brew alcohol to sell in order to buy food ...
News
1 year ago

A Mpumalanga farmworker who had sleepless nights about where her family's next meal would come from after being told she would not get paid during ...
News
1 year ago
Next Article