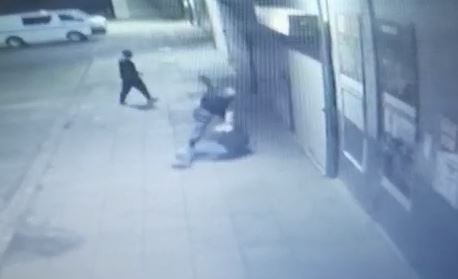 A still from CCTV footage showing the assault on a Reiger Park Pick n Pay manager.
Image: Supplied by IPID

A police officer will be appearing in the Boksburg magistrate's court on Thursday after allegedly assaulting a Pick n Pay manager in Reiger Park, Ekurhuleni, earlier this week.

“Ipid is investigating the incident which occurred at Reiger Park. It is alleged that the police [officer] assaulted the Pick n Pay manager,” she said.

“The police officer/suspect has since been arrested and will be making his first appearance this morning at Boksburg court for assault.

The incident was caught on closed-circuit television (CCTV) outside the shop premises. It is not yet known what sparked the cop's ire.

The footage shows the manager walking casually outside the premises with what could be a phone to his ear. A SAPS member swiftly approaches from his left and delivers a sweeping slap to the man's face before laying his arms around the manager's neck.

WATCH @SAPoliceService members assault a man in Reiger Park last night. Cops cannot be a law unto themselves. This nonsense must be stopped.@IPID_ZA pic.twitter.com/QntdWuyn8E

The man receives another blow which sends him to the floor. He tries to cover his head as he receives more blows. The officer pushes the manager down so he is on his back, swapping hands so he can hold the man down as he delivers more blows to his head.

Another officer joins the scene and restrains the cop. The officer then marches back to the SAPS van shouting and gesticulating as people begin to gather outside the shop.

The whole incident takes less than a minute.