Land occupation in Midvaal is the work of 'criminal syndicate', says city 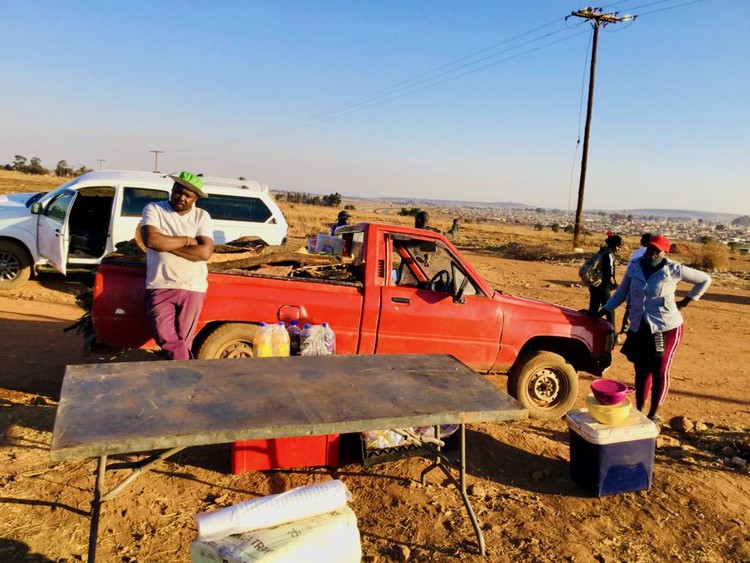 Jeff Maimela has been selling food at the Walkerville occupation. His shack was demolished last week. “My aim is to get a place here and run a business. I am now raising money to buy zinc sheets to build another shack,” he said.
Image: GroundUp

Tensions continue to rise in Walkerville in Elandsfontein, Gauteng, where a group of men calling themselves the Big Six have coordinated a land occupation.

The men and over a dozen other “comrades” insist that they want the land to be taken from “white people” and be given to “black people”.

During the day, people from various communities continue to arrive and pay a “donation” of about R250 to the men for a plot. They say the money is for legal representation to get the land from the current owners. The Big Six have created plots of 20m by 20m and 25m by 25m. The basic amount for the land is R250, but the men say people are desperate and offering more money.

Metro police and the Red Ants cleared the land of shacks last week. Some people were arrested. The Big Six say they will continue to build.

Mokete Motsamai, Mayco member for development, planning and human settlements for Midvaal, said: “This is no longer a land invasion but a criminal syndicate being perpetrated by a group of criminals. They have been successful in doing some land invasions in Johannesburg south. The city was not proactive in the matter.

“They are looking for other areas and Elandsfontein has been an easy target.

“These are people benefiting financially as they are making large sums of money. We have discovered that people are paying up to R2,000 for land … some of the money is being used to pay lawyers.

“We are pursuing it as a criminal matter. Police are planning a response for the weekend as the people are mostly active during weekends. Other people have been arrested. The good thing is we know where the people live and police are on standby,” said Motsamai.

The legal owners of the land say they fear for their lives after receiving death threats. Some have fled their homes. One of them, Clinton Gruar, says he is at a safe house after an attempt to petrol bomb his house in broad daylight at the weekend.

“The situation is out of hand … I am in protective custody. It might seem calm right now but it’s not safe,” he said.

Another landowner, who was too afraid to be named, said at the weekend that more than 400 people protested on Friday, demanding the land. He said that on Saturday he and other landowners gathered on the land to show themselves as the rightful owners. Then things turned ugly.

“A large number of people surrounded us. They threatened to kill us. Some of them started damaging property. They damaged some of our vehicle tyres. We had to flee for our lives. Police came later but a lot of damage had already been done,” said the landowner.

GroundUp saw pictures and videos said to be of the protests.

On Tuesday, the Big Six and some of their comrades were on site. Vendors had also set up some food and drink stalls.

Tshepo Ngobeni, one of the Big Six, said he and the others were arrested in the last week of June but were not charged. They are also opposing an eviction order granted to the city and the matter is scheduled to be heard in December.

“This has become a war between blacks and whites because the whites have been coming to us with guns. On Friday, we as black people, protested. Then on Saturday, the group of whites gathered and things went out of hand. They have been bringing white security forces, trying to get us away from the area, but that will not happen.

“We had wanted to sit down and negotiate with them peacefully, but now they are forcing them to be violent. We will fight if we must.

“Eventually the land should be taken back and given to black people, whether they want it or not. We have been served with court papers … We want the matter in parliament. All political parties and the government must be involved in giving back the land to black people,” he said.

“They blame us for selling land. What of the people who claim to own the land? Who did they buy it from and how? It doesn’t make sense for a white man to own over 100ha of land when blacks have nothing. It’s as if apartheid still exists,” said Ngobeni.

Lethu Masoka, another one of the Big Six, said: “There is nothing private about land. What do they mean when they say land is private? Because no one was born owning land. Real owners of land are our black ancestors. That is the land we are taking. What we know is that land in South Africa is free.”

“Even we cannot control the comrades when they are angry. If they want a war, we will give them a war. We want to take back the land which was taken from our ancestors. There are now over 2,000 people who have bought into the land. When all of us come together to fight, it will not look good.”

He said he and the others were planning a big day when people would gather and re-erect shacks.

Masoka said they were looking for unused, dilapidated buildings in the area to start businesses for black people.

Meanwhile, Motsamai said the army will be deployed if necessary.

Law centre calls for directive to halt evictions during lockdown

A public interest law centre has called on human settlements minister Lindiwe Sisulu to issue a directive to stop the demolition of homes by all ...
News
1 year ago

A Cape Town man who was dragged naked out of his shack in Khayelitsha by law enforcement officers has been left traumatised by the ordeal.
News
1 year ago
Next Article