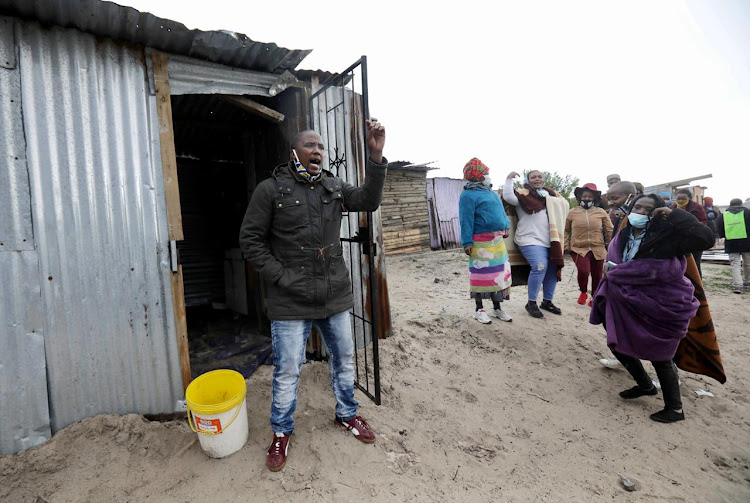 Bulelani Qholani opened a case against the City of Cape Town after a video of him being dragged naked out of his shack went viral.
Image: Esa Alexander

The City of Cape Town has ordered an independent and broadened investigation into dramatic events on Wednesday, when a naked Khayelitsha man was filmed scuffling with metro police officers before his shack was demolished.

Cape Town mayor Dan Plato revealed this during a meeting with parliament's co-operative governance and traditional affairs committee on Friday evening. The meeting was called to discuss “law enforcement actions during evictions in Cape Town”.

Plato and other city bosses told the meeting that Bulelani Qholani was fully clothed minutes before he was involved in the recorded tussle with city officials. He had been roaming around the area following the officials, but suddenly ran into the shack, disrobed and came out waving an offensive white paper.

They said the city had video evidence to this effect, which will be handed to investigators.

“We don't condone the naked part of that incident at all,” said Plato, expressing his regret.

He said the incident was isolated and that it was not what they want to see in Cape Town.

This is also the reason for requesting an independent investigation — so that the city is not seen as covering up. But he insisted that Qholani staged the whole commotion.

“I just want to inform you that when the officers moved to the site, that person was part of the people roaming around. That person did make himself naked upfront and he did walk out of the structure naked upfront in full view of everyone and without a law enforcement officer in his presence,” said Plato in his opening remarks to the meeting.

“When he moved into the structure with officers after him, that is where things went wrong,” he added.

This version was reiterated by mayoral committee member for safety JP Smith, who spoke of the “dehumanisation” of Bulelani Qholani.

Smith said he was shocked when he first saw the video on social media, and he immediately sought an explanation and answers. He said he had not been aware of the operation and that he supported the suspension of four officers.

But a preliminary investigation shows that Qholani was outside the facility as five other structures in the area were being removed in terms of an interim order.

“Mr Qholani is standing with that camera and he hands the camera to an acquaintance and then he can be seen in his structure, and when the structure is erected, he emerges having disrobed and waves a piece which we felt was not appropriate to display to your committee,” said Smith as he took MPs through some of the stills from the city's footage.

He said when the officials went in, it was only then that there was a scuffle.

This, Smith said, is supported by the affidavits from the officials in question.

Another senior official, Cape Town's executive director for safety and security, Richard Bosman, said staff who were on the scene, and who were not involved in the scuffle, indicated that this was “an orchestrated action” with the intention to have a violent confrontation with the city's officials.

Bosman also told the meeting that he has since been approached by the police, who informed him that Qholani has laid a charge against the city and that they were investigating the matter.

"The city may have its own investigations, but from the national side, the department of police is also doing an investigation which is led by deputy commissioner Mfazi working with the provincial commissioner," she said.

The minister said as much as other municipalities also performed evictions, and sometimes things went wrong, the reason there was much attention to the Cape Town incident was "the inhumane nature" in which it was done there.

"Whatever the investigation will say, but what we saw on television was quite disturbing and that is why it has grabbed the imagination of everyone in the country.

"Even if people are breaking the law, it is important to treat them with dignity," she said.

Dlamini-Zuma spoke briefly in the meeting, in the main to defend the national government which had been accused by Al Jamah's Ganief Hendricks of "leaving things to just happen".

She revealed that she had spoken to Plato twice during the lockdown to address evictions in the city.

"When we were on lockdown the very first time and there were evictions in Cape Town, I spoke to the mayor myself about them. He said almost the same [thing as in the] presentation as today, saying they are going to build houses. I said, 'But it's lockdown, where do you want people to go during this time'.

"Then I also called him when there were people who were removed from the shelter and were all over the street. I have actually called the mayor myself," she said.

She said the national government did not agree with land invasions, as much as it does not allow evictions during this time.

She called on parliament to expedite some of the land issues in the legislature to address "land hunger". She said there was a process led by deputy president David Mabuza about land parcels that could be given to the municipality for housing and to disrupt apartheid spacial planning in municipalities.

The City of Cape Town on Thursday morning said that the four law enforcement officers who were involved in the eviction of a naked man in ...
News
1 year ago