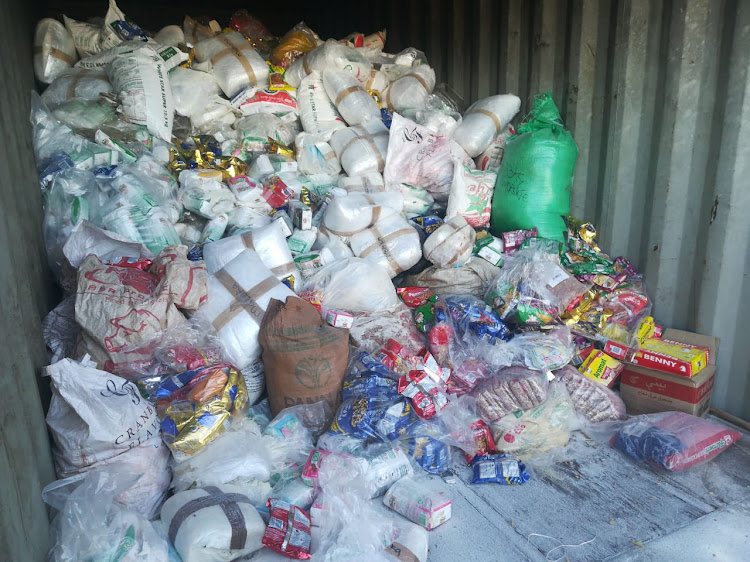 Food parcels with an estimated value of R1m were found at a house in Gauteng on Tuesday.
Image: Saps

Four people, including a supervisor at a security company, have been arrested for allegedly smuggling food parcels and mining equipment to illegal miners in Bekkersdal, on the West Rand.

Police spokesperson Capt Mavela Masondo said security guards were patrolling the area on Tuesday evening when they noticed a suspicious white bakkie at an isolated ventilation site of the mine.

“As the guards were approaching the bakkie, four of the suspects jumped out and ran on foot. The driver also sped off and security guards gave chase until the suspect was intercepted,” said Masondo.

Equipment including a grinder, a welding machine and electric cords were found in the bakkie.

The Gauteng department of sports, arts, culture & recreation has distanced itself from what it calls "a fake" information posted on social media by ...
Entertainment
1 year ago

The 31-year-old driver was identified as the supervisor of the security company contracted to the mine, said Masondo.

The supervisors led officers to a house in Bekkersdal, where they discovered a Toyota Quantum loaded with packed groceries and other assortments. In the house more food parcels were found. Masondo said the food parcels had an estimated value of R1m.

“Preliminary investigation revealed that the food packs were about to be taken to illegal miners who are reported to be operating underground.”

All four arrested were charged with conspiracy to commit crime and are expected to appear in the Westonaria magistrate’s court soon.

Young and old queue for food parcels in Ekurhuleni

The struggle to make ends meet for some South Africans during the Covid-19 pandemic has spurred some nongovernmental organisations and ordinary ...
News
1 year ago

Residents of Gcilima, a semi-rural area on KwaZulu-Natal's south coast, are caught in a political food fight after a member of the IFP was allegedly ...
News
1 year ago
Next Article