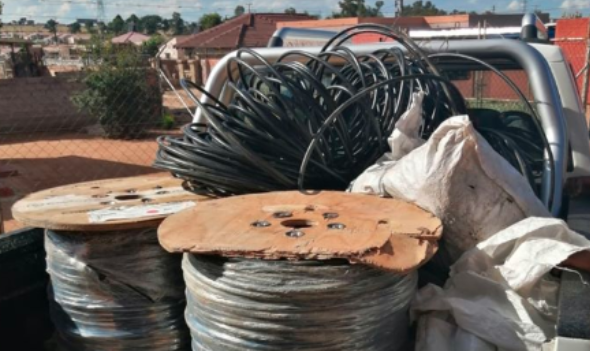 Some of the suspected stolen copper wire discovered by police at a house in Polokwane.
Image: Supplied

An Eskom employee and a scrap metal recycling company owner were arrested in Polokwane on Thursday for alleged cable copper theft and possession of presumed stolen property, Limpopo police said.

They said Westenburg police had acted on information about a suspect who had just offloaded copper wire at a house in Greenside, Polokwane.

“Upon their arrival at the house, they found the owner of the house who owns a scrap metal and recycling company. Police searched the house and discovered copper cables hidden inside, with an estimated street value of over R100,000. He was arrested on the spot.

Eskom says it has been made aware of alleged stock theft by an off-duty employee on a farm in the Northern Cape.
News
2 years ago

“The members followed up further information which led to the arrest of the suspect's accomplice around Seshego policing area. Preliminary investigations indicated that the suspect is an Eskom employee and had stolen and sold the cables,” police said.

Limpopo provincial police commissioner Lt-Gen Nneke Ledwaba commended the members for their swift response and arrest of the suspects.

The two suspects are expected to appear in Polokwane magistrate's court on Monday, facing charges of theft of copper cables and possession of presumed stolen property.

Two Eskom employees and two foreign nationals employed by a scrap dealership were on Thursday arrested for allegedly stealing conductors in the far ...
News
2 years ago

Telecom companies Vodacom and MTN say they are losing millions of rand in capital expenditure as a result of a spike in battery theft from their ...
News
2 years ago

A Mpumalanga township has had raw sewage flowing in the streets for more than two months as its municipality is unable to attend to the problem.
News
2 years ago
Next Article