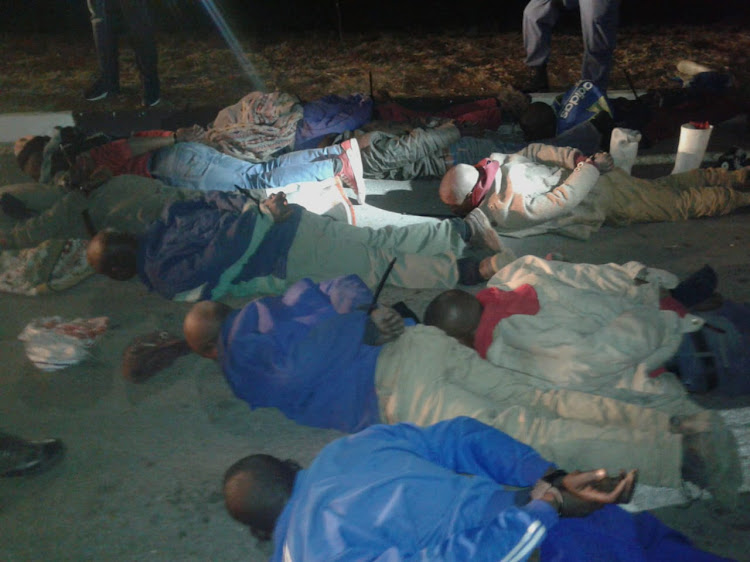 Twelve people were arrested and three firearms were found in a bakkie ferrying passengers in North West.
Image: Supplied

Three firearms – two of them allegedly stolen from security guards and a third licensed to an owner in East London – were seized when police stopped a bakkie ferrying passengers late at night in the North West.

The bakkie was pulled over at a roadblock on Friday on the R30 near Orkney.

“During the roadblock, 12 undocumented persons aged between 22 and 52 were arrested after a bakkie was stopped and searched,” said police spokesperson Col Adéle Myburgh in a statement on Sunday.

“The suspects were arrested after three firearms were found in their vehicle during the search. They were all charged with possession of unlicensed firearm and ammunition.

“Although the third firearm is licensed in East London, indications are that the owner had passed away.”

During the same roadblock, three more people aged 20 to 32 were arrested for possession of drugs after allegedly being caught with 12 bricks of suspected crack cocaine estimated to be worth around R30,000.

All 15 suspects are expected to appear before the Orkney magistrate’s court on Monday.

Joburg police arrest more than 1,000 for drink-driving in August

More than 1,000 people were arrested for driving under the influence of alcohol in Johannesburg in August.
News
2 years ago

Two business robbery suspects were shot and killed in a shoot-out with police in Johannesburg south, police said on Wednesday.
News
2 years ago
Next Article