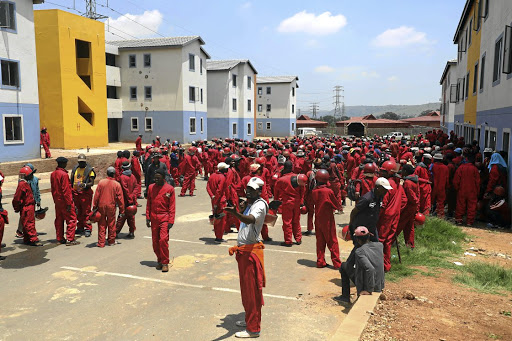 The Red Ants were called in to help evict illegal dwellers from a block of flats in Mamelodi East they had occupied.
Image: Thulani Mbele

Residents of the hijacked municipal flats in Mamelodi, who were evicted yesterday, have vowed to return and illegally occupy the triple-storey apartments.

About 200 security officers from the notorious eviction services company, the Red Ants, accompanied by police and Tshwane metro cops, led the evictions which follow a high court judgment two weeks ago that ruled against the illegal occupants.

From mattresses, curtains to pots and clothes, items removed from the flats were dumped in an open field next to the Mamelodi East police station yesterday morning.

The modern flats with two bedrooms each, a kitchen, toilet and shower, are situated along the busy Solomon Mahlangu Drive in Mamelodi East.

They were initially invaded before construction companies could fit taps and electricity meters in March.

Several families claimed yesterday that they were stranded as they had nowhere to go and will be forced to return to the flats.

Christina Malema, 46, one of those evicted, said she had nowhere to go.

"Tonight I will most probably sleep on the street."

One of the leaders of the flat invaders, who refused to be named, said: "Those people who will be allocated the flats will not live there peacefully, we will fight for those flats."

They claimed that they were on the government housing waiting list and also wanted to be prioritised.

More than 200 people who invaded flats in the municipal social housing projects in Mamelodi East are refusing to vacate the building despite last ...
News
2 years ago

However, unlike last year in April when there were ugly scenes when the Red Ants did evictions, this time the invaders moved out of the flats peacefully without putting up a fight or resistance.

Despite the initial violent evictions, the municipal flats were last month illegally occupied by the same invaders once again.

Tshwane spokesperson Lindela Mashigo said about 100 people were still in occupation of the units illegally prior to yesterday's evictions.

"The eviction was conducted swiftly with no casualties. The City's department of human settlements has promptly commenced with the allocation of the units to the rightful beneficiaries. The allocation will continue for the next couple of days until all 252 unit have been allocated."

Mashigo said the sheriff of the court has arranged that the Red Ants would remain on site until the allocation process has been finalised.

"Red Ants will be supported by law enforcement."