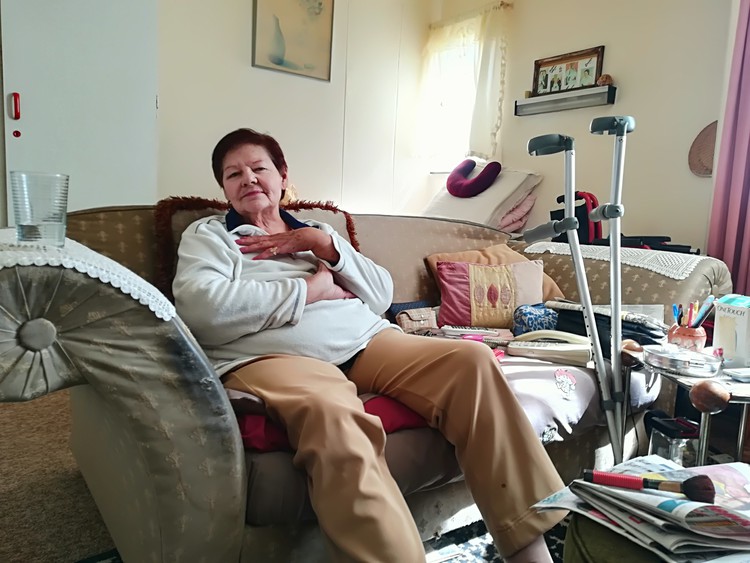 Francis Bubb, 75, is unable to leave her flat on the fifth floor of Donovan McDonald Retirement Village because the elevators have been out of order for about eight months.
Image: GroundUp/Zoë Postman

Francis Bubb, a 75-year-old pensioner, is unable to leave her flat on the fifth floor of her retirement village because the elevators have been out of order for about eight months.

Bubb lives in a retirement home called Donovan McDonald in Florida, a City of Johannesburg facility that has 175 units. Bubb relies on crutches to move around her flat but she needs a wheelchair for longer distances. When GroundUp visited her on Friday morning, she struggled to make it to the door using her crutches.

Sitting on the couch in her single unit, Bubb said: “Just the other day I had to get my blood tested because I’m on chronic medication. I couldn’t get down the stairs so I had to get a nurse to come here and draw my blood which I had to pay for out of my own pocket.”

Bubb would need to descend several flights of stairs to get to the ground floor of the building. She said she had to pay R250 out of her pension money for the nurse to take her blood.

“Now the nurse didn’t take enough blood the last time so she has to come back on May 6. I don’t know what’s going to happen because I really can’t afford it. I’m just a pensioner,” she said.

Bubb is not the only resident that has difficulty using the stairs. Lydia Moketsi moved into her unit on the third floor about 20 years ago. She also needs crutches to move around. We found Moketsi visiting her oldest friend in the village on the ground floor.

“I have to walk down those stairs slowly to come see my friend and it’s very painful. But what can I do? I can’t be trapped up there. I need to come down sometimes,” she said. “This used to be a very nice place when I first moved here but now they don’t take care of us.”

The residents we spoke to said they have been complaining to the city’s operations manager from the housing department, Ethel Sereme, and the city’s acting executive director of housing, Anthony Ngcezula, since the lifts broke but nothing has happened.

“We have complained so many times but it’s always a dead end… What if an emergency happens here? I am tired of complaining, I have just given up now,” said Bubb.

GroundUp requested comment from Sereme and Ngcezula but they had not responded by time of publication. Nor did the City of Johannesburg, who we emailed at noon on Thursday.

Henry Jurius, who also lives in the home, said that residents had not only complained about the broken lifts. He said there was also a lack of security, maintenance, and illegal occupation of units in the village. “There have been cases where people have died in their units and were only found two or three days later because no one patrols to check on us,” he said.

He took GroundUp to the laundry room on the top floor which is no longer in use. The machine covers have been removed and wires are exposed. “These machines haven’t been in use for years. We are forced to buy our own washing machines yet they are supposed to offer this facility,” he said.

Jurius claimed people stole money and wires from the machines which is why they are no longer operating. 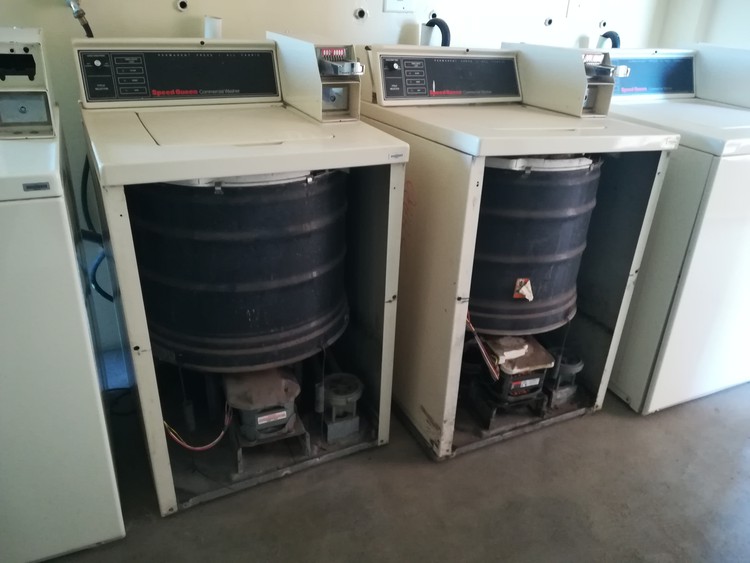 Residents say the laundry room has not been operating for years.
Image: GroundUp/Zoë Postman

Jurius said security at the village was non-existent. “People just come in and out of the premises as they please. They don’t have to sign in which compromises our safety as the elderly,” he said.

GroundUp was not stopped to sign in at the security gates when visiting the village. Jurius recalled a recent incident of theft of a car battery in the parking lot. “We don’t know how these people get in here but we are not safe. We are always living in fear.”

Marie Gibson is the resident whose car battery was stolen. “I needed to go to the shop that day so I got into my car and tried to start it but it was just dead … I got out to check the battery and I saw that the fender and bonnet were damaged. When I looked inside, I saw my battery was gone,” she recalled. “Safety and security don’t exist in this place.”