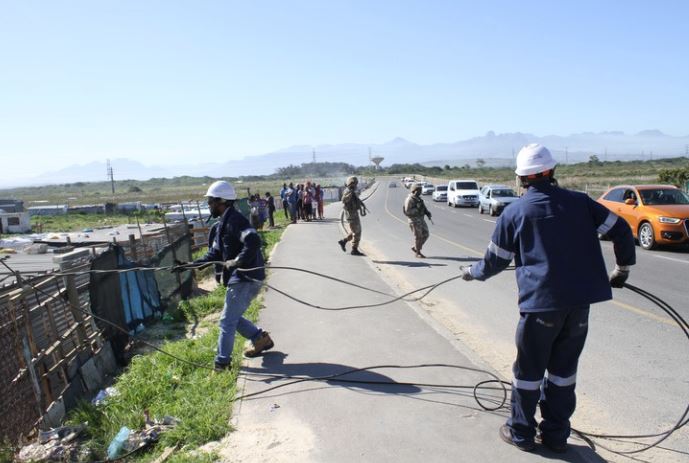 About a month ago, the army was deployed to various areas on the Cape Flats to help police with their battle against gangs and crime. On Tuesday, the army accompanied police to guard Eskom workers who were removing illegal electricity connections into Qandu-qandu informal settlement in Khayelitsha.

The settlement has no basic services and residents there depend on illegal connections for electricity. On Tuesday, residents looked on as wires were disconnected from their shacks. Several people questioned the army’s presence and its role during the removals.

“We will connect again even if we have to use barbed wire,” shouted one resident.

“The army is here to intimidate us so that we do not fight against this oppression,” said resident Siphumelele Doyi. “If people here thought it was only the municipality that does not want us here they must think again. Even our national government is anti-black because the army and Eskom are both national entities,” he said.

Police minister Bheki Cele said on Monday that more than 1,000 suspects had been arrested since the army was deployed to crime-ridden parts of Cape ...
News
2 years ago

Resident Asithandile Myeki said: “We depended on that electricity and now it is gone. I do not think we will let this go. We don’t have water here and now we have no electricity.”

Qandu-qandu is a relatively new settlement and is not yet on the Cape Town database. As a result, it has not received any basic services such as water and sanitation. The settlement is on a wetlands and the municipality has suggested that residents should relocate.

Community leader and Qandu-qandu committee chairperson Ntombomzi Mafaya said: “When did this municipality care about shack dwellers? We are flooded now for almost a month after heavy rains. We have no toilets to relieve ourselves.”

The equivalent of nearly four football teams were murdered in the Cape Town metro region over the past weekend, but as crime levels persist and the ...
News
2 years ago

Charlotte Powell, spokesperson for the city’s disaster risk management centre, said the only solution for Qandu-qandu was relocation.

“The land was illegally occupied and no basic services are in place. The disaster risk management centre made an assessment and requested further assistance from the city’s informal settlement management and roads and stormwater departments as well as from the SA Social Security Agency (Sassa),” she said.

Grant Twigg, acting committee member for human settlements, said: “Current and planned programmes must be respected, and work cannot be conducted in an ad hoc manner where new illegal settlements are formed, with demands for the same services that those who have been waiting for longer are due to receive.”

Axolile Notywala, general secretary of the social justice coalition, said the city had a responsibility to provide services for all residents. “The city needs to explain how and on what basis it has taken this decision on this particular community. We know of other informal settlements of similar age where the city has engaged with the community about putting in temporary services,” he said.