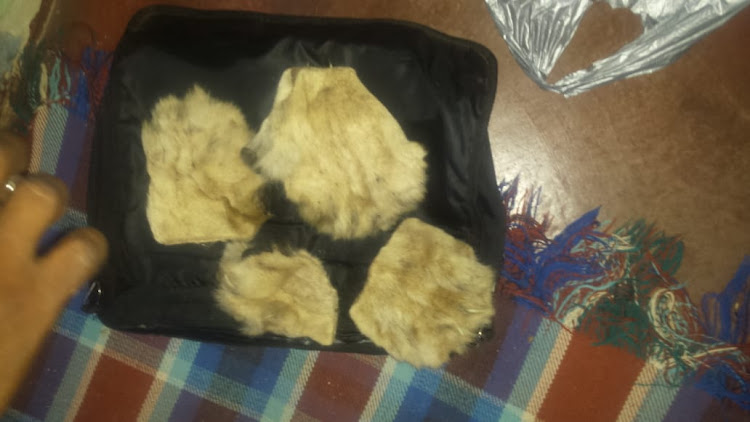 The four are expected to appear in the Rustenburg magistrate’s court on Wednesday.
Image: Saps

Four suspects were arrested during a sting operation after they allegedly tried to sell lion paws in Rustenburg, North West, the Hawks said on Wednesday.

Provincial Hawks spokesperson Capt Tlangelani Rikhotso said the suspects, aged between 41 and 51, allegedly tried to sell the lion paws to an “undercover agent”.

They were arrested and charged with contravening the National Environment Management Biodiversity Act and are expected to appear in the Rustenburg magistrate’s court on Wednesday.

A study, published in October in international journal Biodiversity and Conservation, warned there was a growing threat in the targeted poaching of lions for body parts — and that this could have a devastating affect on lion populations, mirroring similar effects on wild tiger populations.

That same month, police arrested a man near OR Tambo International Airport in Johannesburg with 12 boxes filled with lion bones, reportedly destined for Malaysia.

In the most recent case, eight lions were found dead, possibly poisoned, at a bush lodge near Rustenburg last week. Staff at Predators Rock Bush Lodge made the gruesome discovery. The lions’ paws and snouts had been hacked off.

Eight lions were found dead, possibly poisoned, at a bush lodge near Rustenberg in the North West on Friday.
News
2 years ago
Next Article