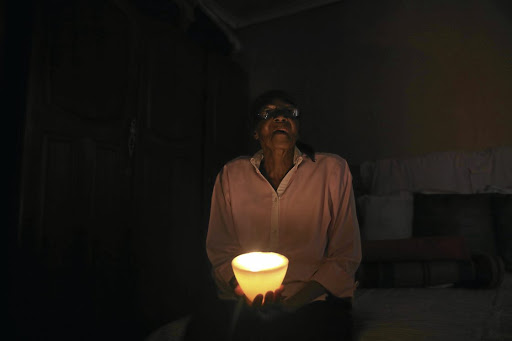 Angelina Makhanya of Dobsonville during one of Eskom's loadshedding nights.
Image: Thulani Mbele

Of all the state-owned enterprises in SA, none has rattled the lives of citizens like Eskom.

The past decade has seen Eskom deteriorate to a point that all rating agencies identified the power utility as the biggest threat to the country's economy. But Eskom has not always been in a mess. In 2001, it was named the Financial Times Power Company of the Year at the Global Energy Awards Ceremony in New York.

Four years later, then Eskom chairperson of the board Reuel Khoza said one of the many factors that made the company successful was its commitment to good corporate governance.

But over the years, Eskom had deteriorated to its worst state. The most prominent indicator that showed that the company was falling apart was the introduction of loadshedding back in 2007.

Former president Thabo Mbeki was brave enough to admit that government did not listen to the warnings from Eskom that electricity supply would not meet the economy which was growing at that time. "We were wrong. Eskom was right," Mbeki said.

From November 2007 to January 2008, SA faced its first load-shedding. Just last week, Eskom implemented load-shedding as many of its units were down and some of its power stations were flooded.

Back when this dreadful system was introduced, the government responded by building two new power stations - Kusile in Mpumalanga and Medupi in Lephalale, Limpopo.

Construction at Medupi began in 2007, while at Kusile it started in 2008. Fast-forward 10 years later, the two projects are still under construction.

Instead of providing relief to demand pressures, the department of public enterprises admitted that they were badly designed, hence they failed to deliver power on schedule.

Medupi is now projected to be completed next year, and its costs have escalated from R79bn to about R146bn.

One gatvol South African made clear his displeasure by altering the Wikipedia page for the chronically challenged Medupi power station.
News
2 years ago

Kusile, on the other hand, is projected to be completed in 2023 and its costs have surged from R81bn to R161bn.

The delays in commissioning units on time had forced Eskom now and again to find other means of keeping the lights on like, the use of open cycle gas turbines (OCGTs).

Eskom paid R47.4bn to 48 suppliers for diesel between 2009 and this year, just to keep the lights on. While generation capacity has been a serious threat, Eskom on the other hand is facing rising debt.

This year, Eskom debt stood at over R400bn. Eskom's wage bill rose from R9.5bn in 2007 to R29.5bn last year. Debt owed by municipalities has also been on the rise. As at June 30, municipalities and individual users owed Eskom over R36.5bn.

SA power supply 'constrained and vulnerable' for the week ahead

There is a possibility of load-shedding this week, says Eskom
News
2 years ago

To keep the lights on and meet operational costs, Eskom has increased electricity prices way above inflation. Between 2007 and 2017, Eskom prices increased by over 300%. Changes in management have also destabilised Eskom over the past decade.

The announcement of Jabu Mabuza as acting CEO in August made him the 10th CEO at Eskom in 10 years. Eskom was also the main target of state capture during former president Jacob Zuma's time.

However, the government has taken bold steps to turn the utility around.

He said the unbundling was to bring efficiencies and focus in different units at Eskom.

Sorry, we can't answer your call right now - Eskom staff are at a Xmas lunch

An exasperated Johannesburg resident, who had been without electricity for two days, went to the Morningside Eskom depot on Friday to enquire why his ...
News
2 years ago

No loadshedding over the long weekend, says Eskom

Power utility Eskom said on Friday night that it did not expect load-shedding over the long weekend.
News
2 years ago

SA needs an additional 5,000MW of generating capacity, here are some ideas
News
2 years ago
Next Article