'Lights to stay on through Christmas to New Year' 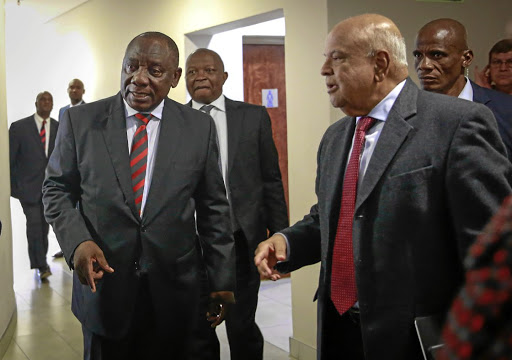 President Cyril Ramaphosa has pledged that loadshedding will come to an end on Tuesday next week - and that "it will not be a dark Christmas".

The president said that from December 17 to January 13, and "hopefully thereafter", the lights would stay on.

This came as the president announced measures that will be taken to bring load-shedding to an end. The drastic steps include the cancellation of leave for all Eskom senior managers and executives.

The president said Eskom's management was working on an emergency recovery plan to get rid of load-shedding.

Eskom pledged that problems that plunged the country into darkness and led to unprecedented stage 6 load-shedding, would be resolved and the power back into the system by the end of the week.

Ramaphosa cut short his trip to Egypt and met Eskom's board and management alongside deputy president David Mabuza and ministers Gwede Mantashe and Pravin Gordhan yesterday.

The president announced that a mix of "sabotage", wet coal and an ageing fleet, led to stage 6 load-shedding across the country on Monday. The sabotage, allegedly at the hands of an Eskom insider, led to two boilers being disconnected.

"The sabotage happened in a way where we lost 2,000MW. The wet coal led to a loss of additional megawatts. All that was a combination. Sabotage is not the only factor that led to load-shedding," Ramaphosa said.

Bheki Nxumalo, Eskom group executive for generation, said they found tampering with the monitors at the station that led to the tripping of two boilers.

Ramaphosa said the energy grid was unreliable and unpredictable for a number of reasons. "We will investigate the sabotage. We directed the sabotage acts to be investigated.

"Eskom will work with SAPS and the intelligence agency as well to find out exactly how anyone within Eskom could have disconnected the instrument that led to the loss of 2,000MW," he said.

Nxumalo said there had been a recovery of the system and that, by Monday, all units should be up and running.

Bernard Magoro, general manager of systems, said they should be able to bring back 9,500MW to the grid on Monday, allowing for stability.

Ramaphosa had called for accountability among Eskom's managers and for them to be proactive. "We want the board to rigorously enforce accountability by all. Everyone in Eskom must be held accountable," he said, while also noting his support for the board.

He said Mantashe and Gordhan would present to the cabinet tomorrow ways to increase electricity capacity, which will also include self-generation.

Ramaphosa said Eskom management had asked for 5,000MW increased capacity which could be relied on to maintain and refurbish ageing power stations.

However, Oberholzer said they are yet to work out how much they will need to restore ageing power stations.

President Cyril Ramaphosa has cut short his two-day trip to Egypt amid calls for him to deal with the load shedding crisis that has befallen the ...
News
2 years ago

Stages 6 to 8 load-shedding: What it means and how it affects you

Eskom implemented stage 6 load-shedding for the first time in history on Monday and has announced that it has started planning for stages 7 and 8.
News
2 years ago

SACP general secretary Blade Nzimande has blamed government’s policy direction for the failure of state-owned enterprises such as Eskom and South ...
News
2 years ago
Next Article