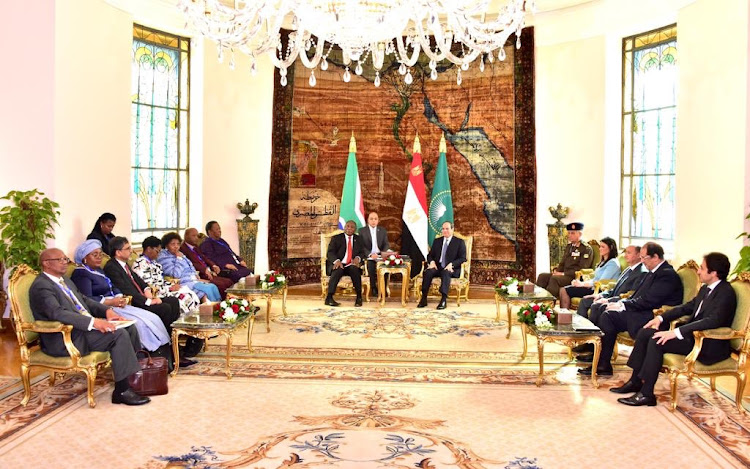 The Presidency has confirmed that President Cyril Ramaphosa has cut short his two-day trip to Egypt and is on his way back to South Africa.

This is amid calls for him to return from Egypt to deal with the loadshedding crisis that has befallen the country since Thursday last week.

Ramaphosa, who met with the Egyptian president Fatah El-Sisi will return to South Africa later today.

Presidency spokesperson Khusela Diko confirmed that Ramaphosa will tomorrow meet with Eskom board and executives to explain the recurring power cuts.

“President Ramaphosa will on Wednesday meet with the board and management of the national power utility Eskom where he will be briefed on plans to mitigate and resolve the current electricity crisis affecting most of the country,” Diko said.

Ramaphosa will also visit floods-stricken areas including Tembisa in Ekurhuleni.

“The President is also expected to visit Tembisa on Gauteng’s East Rand that has been severely impacted by the recent rains, leading to wide scale flood.

“The President will meet with local residents, community leaders and provincial officials managing the support being given to the stricken community,” Diko said.

The SA Weather Service on Sunday issued a flood warning for parts of the Gauteng, Mpumalanga and the North West provinces after days of heavy rain.
News
2 years ago

This comes amid calls led by the DA interim leader John Steenhuisen for Ramaphosa to cut short his trip and address the electricity crisis.

Eskom has implemented loadshedding for six consecutive days since Thursday last week. The crisis deepened yesterday when the power utility had to, for the first, implement stage six loadshedding.

The explanation given by Eskom was that there were technical problems at the Medupi power station in Lephalale, Limpopo resulting in a need to shed 6,000 megawatts from the power grid.

The DA’s interim leader John Steenhuisen said that the implementation of stage six last night was devastating for an already struggling economy.

“The country is asking what exactly is going on, and we deserve full transparency on this threat to national stability,” Steenhuisen said.

“In these extraordinary circumstances, we call for Parliament to urgently be reconvened in order for President Ramaphosa to address Parliament and the nation on this escalating crisis. The President must come clean on exactly what the structural problems at Eskom are and how his government plans to address them within the coming days.”

Diko said that Ramaphosa, who was scheduled to be in Egypt at least until tomorrow, was meeting with El-Sisi for an official handover of the Africa Union chair, a role which South Africa assumes next year.

“With South African assuming the Chair of the African u=Union in 2020, President Ramaphosa and president El-Sisi, who is the outgoing AU Chair, also discussed matters around deepening continental integration, peace, security and development,” Diko said.

SACP general secretary Blade Nzimande has blamed government’s policy direction for the failure of state-owned enterprises such as Eskom and South ...
News
2 years ago
Next Article