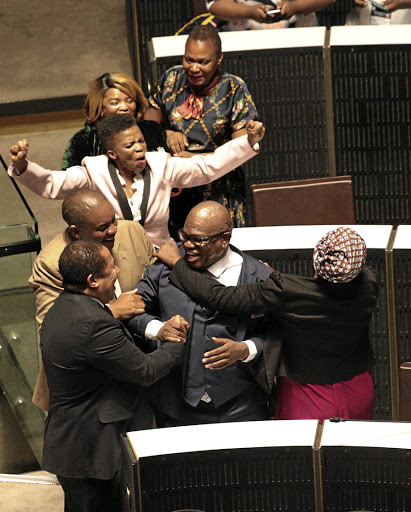 The new Johannesburg members of the mayoral committee appointed by recently elected mayor Geoff Makhubo will be sworn in tomorrow.

Makhubo on Saturday appointed a mix-bag of members of the mayoral committees (MMCs) including five from the ANC and five from opposition political parties that were key in putting the ANC back into power at the hotly contested mayoral vote last week.

To the surprise of many, Makhubo retained IFP's Nonhlanhla Makhuba in the transport portfolio and appointed another IFP councillor, Mlungisi Mabaso, to the housing portfolio.

The ANC will be in charge of finance, where party spokesperson in Johannesburg Jolidee Matongo was appointed, and Eunice Mgcina is the new political head of health and social development.

"This team will be officially sworn in on Tuesday and will hit the ground running," Makhubo said.

"Let us serve the people of Johannesburg with pride and dignity. All hands on deck. Our people expect quality service delivery from us. I am confident that these men and women will do just that."

The IFP has been handsomely rewarded for supporting the ANC and allowing it to regain control of the City of Johannesburg.
News
1 year ago

The move to appoint opposition political parties to key portfolios was seen as a reward to the parties for voting with the ANC.

The parties, including three DA councillors who broke ranks by not voting for its candidate Funzela Ngobeni, were instrumental in ensuring that the ANC got 137 votes in the vote on Thursday.

"Was this a reward? All of us are in a coalition. [We] are in a partnership and it's a political partnership. So no one is rewarding anyone," Makhubo said.

He said that with only 18 months before the next local government elections in 2021, he expected this team to respond to service delivery issues in the municipality.

Makhubo said under former mayor Herman Mashaba, service delivery came to a "halt" and the city's finances were not in a "good state". - Additional reporting by Aphiwe Deklerk