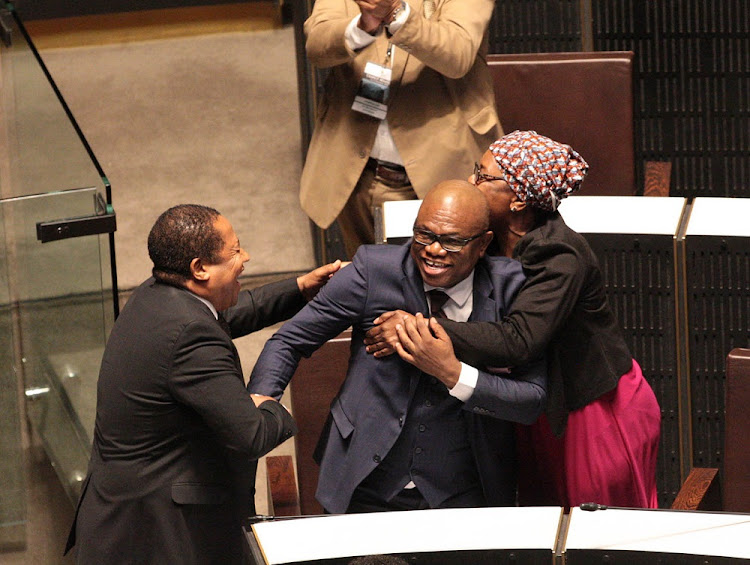 Geoff Makhubo is congratulated on his election as mayor of Johannesburg this week.
Image: Sowetan/Veli Nhlapo

The IFP has been handsomely rewarded for supporting the ANC and allowing it to regain control of the City of Johannesburg.

Makhubo appointed Nonhlanhla Makhuba as transport MMC and Mlungisi Mabasa as housing MMC. They are both from the IFP.

The two portfolios are important because they are largely used by politicians during campaign time to reach out to residents.

The ANC's efforts to take full control of Johannesburg hit a snag yesterday after a motion of no confidence against speaker Vasco da Gama failed.
News
1 year ago

The four parties were key in bringing the ANC back into power in a move which left the former ruling party, DA, stunned.

But Makhubo denied that the appointments were a reward for the support they offered.

"Was this a reward? All of us are in a coalition. [We] are in a partnership and it's a political partnership. So no one is rewarding anyone.

"We came together and asked ourselves, 'What is a minimum programme? What do we seek to achieve and what is in the best interest of the residents of Johannesburg?'

"And thereafter, we agreed that we are going to work together going forward and part of working together was to contest the election last week," said Makhubo.

He said their working together was a truly multiparty government which would deliver services to the residents of Johannesburg.

Loyiso Masuku will take charge of corporate and shared services. She is the wife of Gauteng health MEC Dr Bandile Masuku.

The threat by the EFF to not back any budgets by the ANC government in Johannesburg, although possible, is just politics.
News
1 year ago

Asked if he would be able to manage political differences between his coalition partners, Makhubo was confident, saying there would be a team dedicated to resolve differences.

But he was not so welcoming of having to work with speaker Vasco Da Gama, who the party believed they toppled on Thursday.

Although the DA believes the ANC failed to remove DA Gama via a motion of no confidence when it only managed 135 votes in support of the motion, Makhubo believes the number was sufficient and that the city does not have a speaker.

"In our minds there is no speaker; we can't be bickering for two weeks on what the meaning of majority is," said Makhubo.

He said there was proof that motions had previously passed in council with less than 135 votes in council, and the party would soon convene a meeting to elect a new speaker.