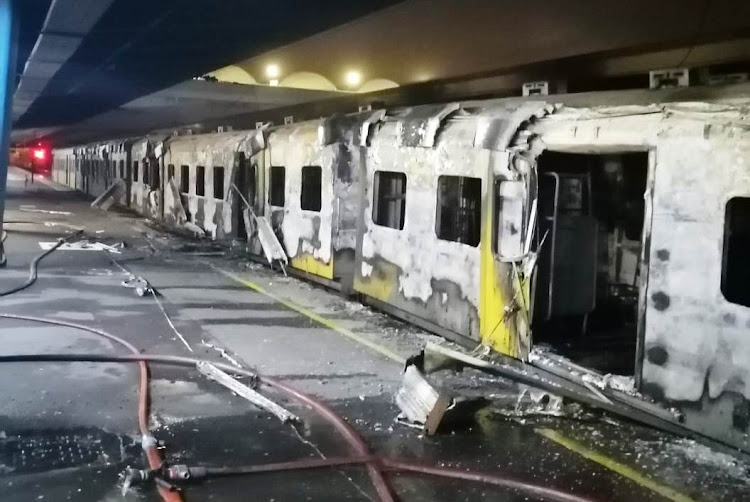 The remains of a burnt train at Cape Town station on November 28 2019.
Image: City of Cape Town

All commuter trains in Cape Town were cancelled on Thursday morning after fires at the city's central station destroyed 18 carriages.

“Commuters are advised to find alternative transport and we will update commuters during the course of the day as events unfold.”

City of Cape Town fire service spokesperson Jermaine Carelse said the alarm was raised at 2.20am.

Police in the Western Cape are investigating foul play after three carriages were torched on a Metro Rail train at Glencairn train station on Monday ...
News
2 years ago

The first crews to arrive found carriages alight at platforms 9 and 10, he said.

“Upon further investigation, fires were found on platforms 12, 13 and 15 and more resources were requested to contain the blaze.

“A number of motor coaches and passenger coaches were destroyed and the fire was extinguished at 4.53am.”

Scott said 18 carriages were destroyed and platforms 9 to 16 were closed.

Carelse said: “No injuries were reported and the scene was handed over to the Passenger Rail Association of South Africa (Prasa).”

Hundreds of thousands of commuters still use Metrorail trains to commute in Cape Town, despite a string of fires, attributed to arsonists, but unsolved. They have left services limping.

Fire and rescue services were attending to a train fire at Glencairn railway station in Cape Town on Monday afternoon.
News
2 years ago

Several train carriages were burnt in a fire that started at a Transnet engineering yard in Maitland, Cape Town, on Sunday.
News
2 years ago

Yet another train carriage was engulfed in flames at Cape Town station after lunch on Wednesday.
News
2 years ago
Next Article