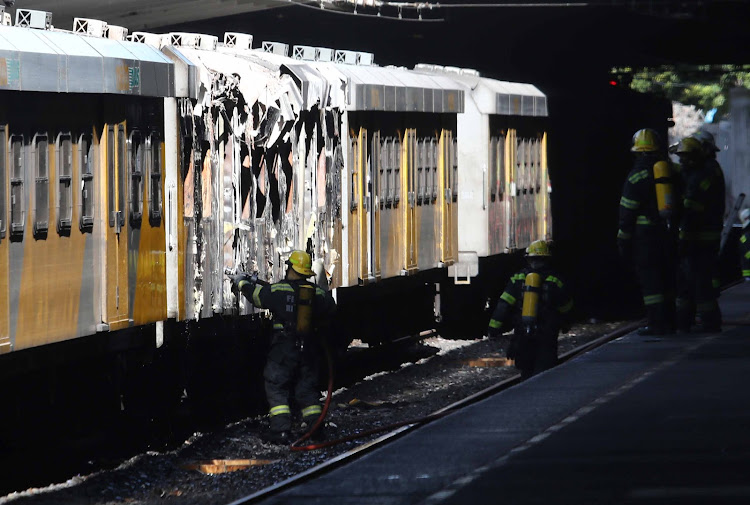 Firemen look at the damage after train another was set alight at Cape Town station
Image: ESA ALEXANDER

Firefighters battled to contain a train fire in the city’s central station as thick black smoke hindered their ability to get close.

At the same time in Firgrove‚ near Somerset West‚ another train was set alight. And rail services to Wellington were cancelled after a train was set on fire in Mbekweni‚ near Paarl.

City of Cape Town fire and rescue services spokesperson Theo Layne said the cause of the fires was undetermined.

He said no injuries had been reported in the Firgrove and Cape Town incidents. Before Friday’s fires‚ Metrorail was down to 42 trains of the 88 it needs to operate its Cape Town commuter timetable. Arson attacks so far this year have cost R93m.

Activist group #UniteBehind has called on the Passenger Rail Agency of SA to allow the use of September monthly tickets in October‚ due to the poor train service caused by a shortage of rolling stock‚ and is planning a mass protest for Thursday October 4.

Spokesman Matthew Hirsch said the commuter rail system should be declared a national disaster so that funds could be released to tackle its problems.