Fire leaves over 160 homeless in Khayelitsha 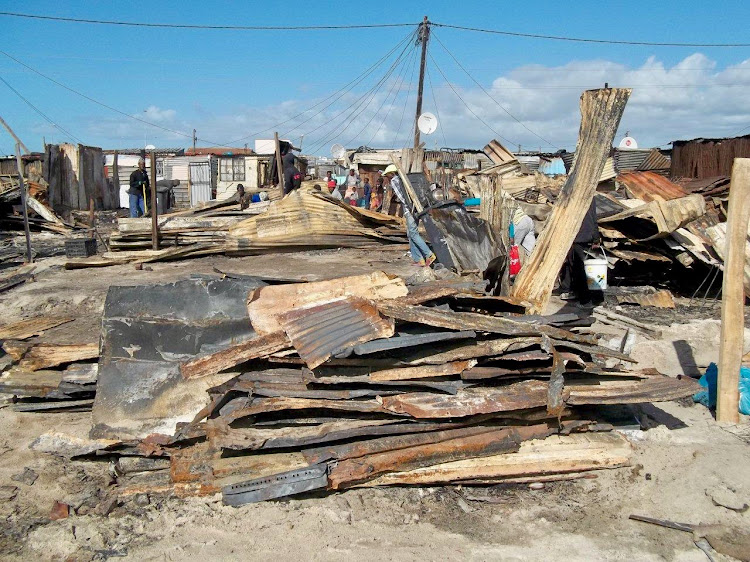 About 35 shacks were destroyed by fire in Tsepetsepe informal settlement, Khayelitsha, in a fire on Tuesday.
Image: Vincent Lali via GroundUp

On Tuesday, about 35 shacks were destroyed by fire in Tsepetsepe informal settlement, Khayelitsha, leaving 162 people without a roof over their heads.

Shack dwellers said they battled the fire from about 11am till 3pm. “The fire started in one closed shack where an electricity box exploded while the owner was at work,” said Xolisani Adam, who helped fight the fire.

“The electrical cables burned and caused other electrical boxes to explode as well and burn other shacks.”

“Some shacks were closed as the residents were away at work, so we had to kick doors down and pull their belongings out,” said Adam.

He said he and other residents used hosepipes and buckets of water to extinguish the blaze. “We connected the hosepipes to one communal tap. We needed water badly,” said Adam.

He said the first fire engine came without water, another with inadequate water and only the third vehicle “came filled with water”.

But Theo Layne, station commander for the fire and rescue service, said, “The responding vehicles had water in them at the time of dispatch”. He said, “Fire engines are always replenished with water after every incident that they respond to."

"The officers in charge of each vehicle will not make the resource available for dispatch unless the vehicle is full of water … One tank of water on a fire engine only holds 2,500 to 3,000 litres of water, depending on the type of vehicle, and at full pumping pressure will only last for an average of three to five minutes before the vehicle has to be replenished again. To supplement the available water for firefighting, we dispatch water tankers which carry on average 5,000 litres of water.”

“One adult female, known as asthmatic, suffered smoke inhalation. She was treated on the scene by fire service medics but she refused transportation to hospital,” said Layne. He said the City has not yet determined the cause of the fire.

No country for the poor

Despite its progressive constitution and policies that provide a social wage for a large percentage of the less privileged, SA is no country for its ...
Opinion
3 years ago

Buyiswa Maguzu said, “My kid fetched me from the [hair] salon. When I arrived in my area, the smoke choked me, preventing me from entering my shack. I wanted to take out my ID because I’m looking for a job.”

“For years I sold sweets on the train from Philippi to Cape Town in order to get cash to buy the shack and other things. Now I don’t know where I will get money to rebuild the shack because I’m no longer selling sweets,” she said.

Nomfundo Sogaxa, who lives with her two children and grandchild, said the blaze destroyed her shack, TV, DVD, stove, fridge and the new clothes she had bought her children for Christmas day.

She was lying in bed when she heard residents scream “fire”. “I stepped out but could not see anything as black smoke filled the air and choked me. I simply pulled my kid out and ran … I’m grateful to be alive because I can still buy my damaged belongings, but I would not be able to buy my life again if the fire had killed me.”

Community leader Zukile Ntuse said fires had been plaguing the informal settlement since its establishment in 1992.

“Fires spread easily because our shacks are closely clustered. We now want the City to build houses for us,” he said. “If the city can’t give us houses, it must remove some of the shacks so that they are not too close to each other.”

The City’s Disaster Risk Management Centre said it had informed SASSA for humanitarian assistance and the City’s Informal Settlement Department about the fire.