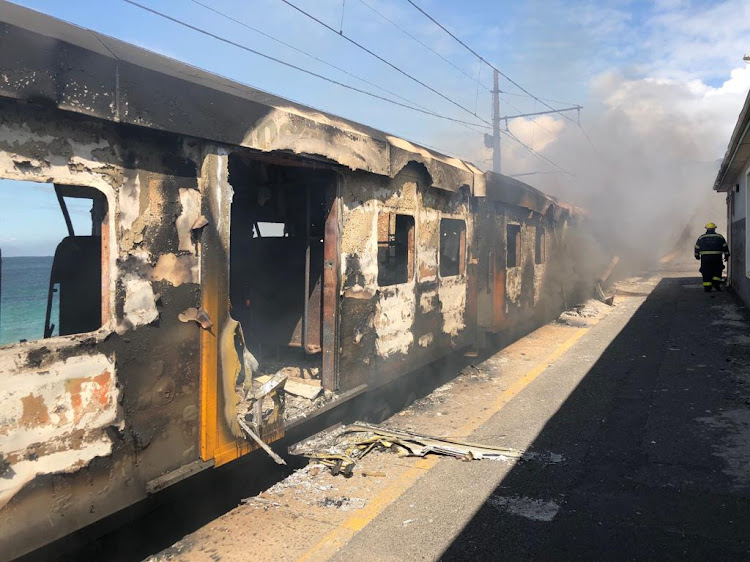 Police in the Western Cape are investigating foul play after three carriages were torched on a Metrorail train at Glencairn train station on Monday afternoon.

The blaze gutted the train, which was en route from Cape Town to Simonstown.

Police spokesperson Captain FC van Wyk said criminal forces may have been behind the blaze.

"A case of malicious damage to property is under investigation after a train carriage was set alight at Glencairn station," he said.

Metrorail said the incident would heavily impact its ability to run efficiently.

"Preliminary reports indicate no reported injuries. Fire and rescue, SAPS, Metrorail technical, operations and security teams are on site to deal with the fire and to investigate the incident."

Fire and rescue services were attending to a train fire at Glencairn railway station in Cape Town on Monday afternoon.
News
2 years ago

Metrorails said the incident "immediately impacts all inbound/outbound Simon’s Town trains which are now forced to terminate at Fish Hoek until further notice".

"Mop-up operations will be able to commence after the train has been moved to the depot, where  safety tests will be conducted to assess any damage to  underlying or overhead infrastructure as a result of the fire.

"The cost of the damage will be confirmed once the damaged train has been taken to the depot and the Passenger Rail Agency's (Prasa's) loss adjusters have assessed the damage."