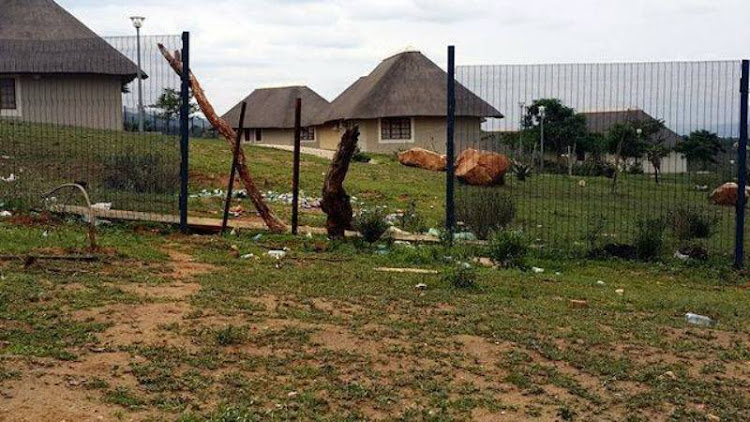 The Nkandla municipality is trying to verify whether pictures apparently showing Jacob Zuma's homestead in disrepair are authentic.
Image: Twitter/@Deni707

Municipal officials have embarked on a “fact-finding” mission to establish whether former president Jacob Zuma’s controversial R246m homestead is in disrepair.

This comes after pictures started circulating on social media on Tuesday of the security fence surrounding the homestead broken in places.

Municipal manager Langelihle Jili told SowetanLIVE's sister publication TimesLIVE that a team was on a “fact-finding mission regarding the matter” on Tuesday.

The homestead became a source of national controversy after it emerged that public funds were used to upgrade the compound. These included a fire pool, the fence and a helipad.

Jili said the municipality would comment on the matter after the inspection.

This is the latest development in a string of woes to hit the former president.

Last week, judgment was reserved in the matter in which Zuma and French arms company Thales are appealing a decision to dismiss their application for a permanent stay of prosecution.

The Sunday Times reported last year that should Zuma be convicted of corruption‚ the state could confiscate his Nkandla homestead for having been built with the “proceeds of crime”.

Meanwhile, the curators of liquidated VBS Mutual Bank also have their sights on the homestead.

Papers filed in the high court in Pietermaritzburg said Zuma had to pay back R7.3m on his bond or liquidators would attach his property.

VBS Mutual Bank granted a loan to Zuma in 2016, after he was ordered to pay back some of the money spent on upgrades to his homestead.

The former president fell behind on the repayments for the first time in August 2018, when he was in arrears of R109,568.

Jacob Zuma was a no show in the Pietermaritzburg High Court on Friday where he and French arms company Thales are appealing the decision to dismiss ...
News
2 years ago

Jacob Zuma may not get a fair trial because of Schabir Shaik bias, argues defence

Submissions by former president Jacob Zuma’s legal team that any judge presiding over his case would just “read the record” of the Schabir Shaik ...
News
2 years ago

Former president Jacob Zuma has been caught in a bitter battle between his fiancée and nephew over a tender business deal gone wrong.
News
2 years ago
Next Article