Jacob Zuma may not get a fair trial because of Schabir Shaik bias, argues defence 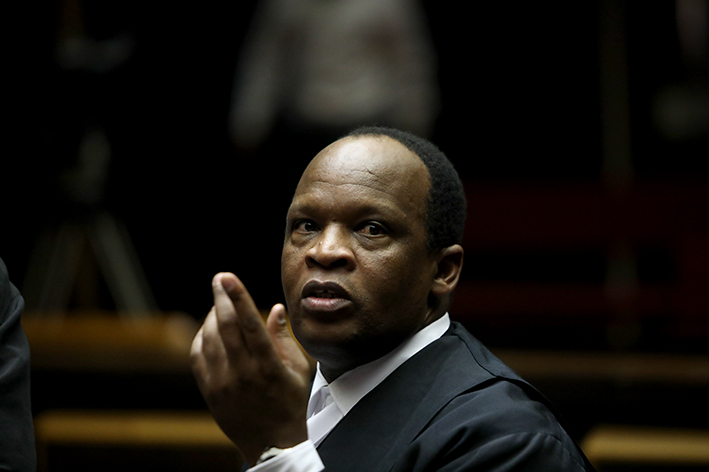 Submissions by former president Jacob Zuma’s legal team that any judge presiding over his case would just “read the record” of the Schabir Shaik trial and sentence him, showed a complete lack of understanding of criminal proceedings.

“It assumes that a judge presiding will not understand the basic conduct of a criminal trial,” advocate Andrew Breitenbach said in his argument on behalf of the National Prosecuting Authority against a bid by Zuma and French arms company Thales for leave to appeal against a court ruling that they not be granted a permanent stay of prosecution.

The “extreme” submission was made in Zuma’s heads of argument submitted to the court, but during argument in the Pietermaritzburg high court on Friday, his advocate Muzi Sikhakhane described as “zilch” the chances of Zuma successfully keeping out of evidence the “encrypted fax” used during Shaik’s trial.

The “encrypted fax” recorded a bribe of R500,000 a year for Zuma, who was then deputy president, from French arms company Thomson CSF (now Thales) in return for protection during any investigation into arms deal irregularities.

Sikhakhane said it has been found by the supreme court of appeal to prove a corrupt relationship between Zuma and Shaik and hence Zuma would not get a fair trial.

Former president Jacob Zuma has been caught in a bitter battle between his fiancée and nephew over a tender business deal gone wrong.
News
2 years ago

Breitenbach said Zuma was “putting up conspiracy theories” and the Shaik trial had not been a “dry run”, as he alleged.

“He has been presented with an indictment, he will have to plead to the charges and the state must produce evidence which he can test and object to.

“If there is an objection to the admissibility of the fax, it will be adjudicated on its merits considering the prevailing circumstances. We know there was an objection in the Shaik trial and it was admitted.

“But the circumstances have changed since then. The person who typed it and sent it has died so there may be different considerations. But the point is, the state will have to adduce all the evidence again,” Breitenbach said.

He said Zuma’s argument for leave to appeal was “very general” and did not reach the “raised” bar of showing that another court would — not might — find differently.

“He does not claim trial prejudice through death, or disappearance of witnesses, lost documents or failing memory. His case is that he has suffered because of the past actions of previous national directors of public prosecutions.

“This court knows, and the constitutional court has said, if the prejudice is not trial-related, the circumstances must be so extraordinary as to make the inappropriate remedy of a permanent stay of prosecution otherwise appropriate.

“None of his grounds of appeal come close to meeting this high standard.”

Argument continues on Friday afternoon. Judgment will be reserved.

Jacob Zuma was a no show in the Pietermaritzburg High Court on Friday where he and French arms company Thales are appealing the decision to dismiss ...
News
2 years ago
Next Article