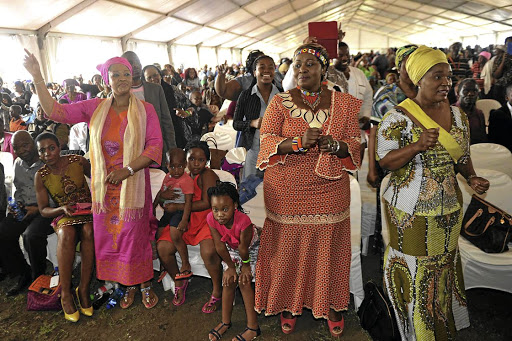 Thobeka Madiba-Zuma, Bongi Ngema and Nonkululeko Mhlongo, right, who is at the centre of a dispute over money from a tender with Zuma's nephew Zobaphi./ Khaya Ngwenya /Gallo Images

Former president Jacob Zuma has been caught in a bitter battle between his fiancée and nephew over a tender business deal gone wrong.

Zuma's nephew, Zobaphi, accuses Zuma's longtime fiancée, Nonkululeko Mhlongo, of swindling him of at least R500,000 due to him after the two scored a tender to build water pump stations.

But Mhlongo says she doesn't owe the young Zuma a cent and labelled him a "liar" and a "devil".

Zobaphi reported the matter to Zuma but the former president failed to convince his other half to make good on their agreement.

Zobaphi told the Sowetan that Zuma advised him to pursue legal action to recoup the funds from Mhlongo.

"This matter was reported to ubaba by myself and a gentleman whom we contracted for. When his intervention did not yield any progress, he gave me permission to use whatever means necessary to recoup the money owed to me and a worker," Zobaphi said.

Mhlongo is a Pietermaritzburg-based businesswoman and mother of two of Zuma's children.

She was approached by Zobaphi to bid for business to subcontract in a water pumps construction project.

The contract between Mhlongo and Zobaphi, which Sowetan has seen, states that profit or loss sharing must be 50/50 between the two. However, he said he was only compensated for supervising daily work during the project.

Patrick Khanyile, a human resources manager at Cmc di Ravenna, confirmed that he had met the former president with Zobaphi twice to ask for his intervention.

"The former president said he washed his hands and we must do what we need to do. MaMhlongo then told us that she paid the money into Zoba's wife's account but his wife died long ago and the proof of payment she showed us is of an account that does not exist," he said.

Zobaphi said he was shocked when Mhlongo told him in January that there was no money.

When contacted by Sowetan Mhlongo refuted Zobaphi's claims, instead arguing that she was owed money because she ran the project from her own account.

Former first lady Nompumelelo Ntuli Zuma has broken her silence about the abuse she claims she has gone through in the last five years while awaiting ...
News
2 years ago

"I owe him nothing. In fact the project owes me. He's a bloody liar. He's the devil. I carried the losses for the whole project. He's lying and I'm very hurt," she said.

Mhlongo said they were initially meant to get over R1.7m for the contract but had received far less as it was later decided by the main contractor that all the sub-contractors would get paid the same.

She said that this meant that the calculations of just over R1.7m that they had based the project on had changed and they now had to work with amounts below R1.3m.

"We ran into problems because it meant that the calculations we had had to change because they said that all labourers would get the same. Our calculations were very wrong," she said.

She said this meant the company was going to run the project at a loss. "We could not even afford general workers' salaries and I had to put in my own money," she said.

"I do not have the exact amount [that I put in] but I did. I was not getting anything from the project. I used my kids' money to fund it. I was paying general workers from my own pocket."

Mhlongo said she regrets working with Zobaphi whom she said knows nothing about business. "I should have done this work myself because I qualified. This is the last thing he's banking in hopes of getting millions because he's not in business. He doesn't understand that a business can run at a loss," she said.

A 29-year-old alleged fraudster accused of soliciting more than R10m from people in Ulundi and Nongoma in KwaZulu-Natal is expected to file a formal ...
News
2 years ago

The time for leaders like Mendi Msimang who had abiding honesty and an essential integrity is not over‚ it has barely begun, Ramaphosa said
News
3 years ago
Next Article