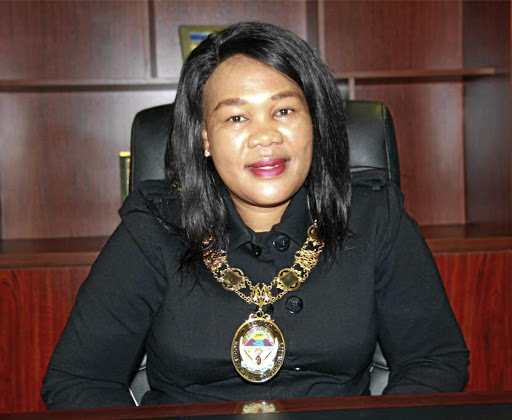 Andrina Matsemela is offended by accusation that she knows about the assassination of two officials. /ANTONIO MUCHAVE

Mogalakwena local municipality mayor is heading to court demanding R10m in a lawsuit against a police officer who accused her of killing his brother.

Kekana allegedly made the accusations during his brother's memorial service in July.

Khanyane and Kekana were shot by unknown men in Mokopane after attending a council meeting.

Matsemela, through her lawyer advocate Mphafolane Koma, told Sowetan they had served Kekana with R10m lawsuit for defamation.

"Kekana sent us a letter of apology and we rejected it because we feel his statement was malicious and defamatory. We demand that he compensate the mayor for his careless remarks. We are going to court for this to be heard and a ruling made," Koma said.

He said the apology was rejected "because there is no offer for compensation and the court will decide on whether he had the intention to make those remarks".

Koma said the comments made against the mayor had not only impacted negatively on her persona but also on her family, relatives and the entire community of Mokopane.

"We view the unsubstantiated and malicious allegations in serious light and reserve our right to approach a competent court of law to test same and violation of her rights and bringing her good name into disrepute."

Kekana, through his attorneys Cheadle Thompson and Haysom Inc, said he wished to retract the statement and apologise unreservedly for the statement that he made concerning Matsemela.

"The statements were not made with any malicious intent to lie or defame the character of your client but reflected our client's beliefs and opinions at the time.

"Our client did not publish these statements on any public media, social, national newspapers and other electronic and broadcast media platforms," reads the letter of apology.

Matsemela had survived several protests in Mokopane in which residents wanted her to step down.

Taps remain dry as Mogalakwena waits on the ANC

WATCH | Violence erupts in Mokopane with calls for removal of mayor

Protesters are demanding the removal of embattled Mokopane mayor Andrina Matsemela, who is reportedly hiding.
News
2 years ago