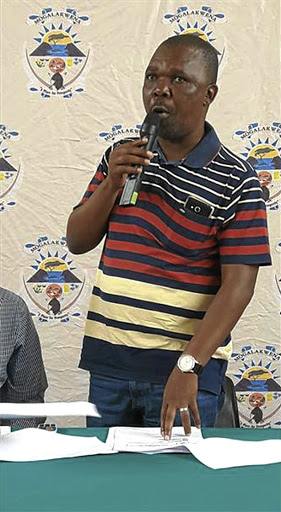 Mankopane Mike Rapatsa has been stripped of his title of chief whip.
Image: Polokwane Review

The ANC in Limpopo's Waterberg region has sacked three of its executive council members in Mogalakwena local municipality for "deliberately failing" to attend council meetings resulting in it being unable to adopt key decisions.

During the special council meeting held on Tuesday in Mokopane, it was resolved that councillors Lesibana Langa and Mabu Sanny Tlhaku be removed as executive members, while Mankopane Mike Rapatsa was removed as the chief whip of the ruling party in the council.

Mogalakwena municipality has further withdrawn eight councillors as representatives from the Waterberg district.

ANC Waterberg region spokesperson Matome Moremi-Taueatsoala said that in its ordinary sitting of the regional executive committee (REC) in August, the party received a damning governance report on the state of affairs in the municipality.

"The report mainly made it clear that the functioning of the municipality was hampered by the chief whip of the municipality, three exco members and few other ANC ordinary councillors who would deliberately not attend either exco meetings or council meetings, with the full knowledge that the two most important and legislated meetings would not have the required quorum.

"Thus making it difficult for the municipality to process certain but important reports, such as the adoption of municipal budget," Moremi-Taueatsoala said.

He said the REC received a report that the matter had been persistent from as early as March this year.

Limpopo ANC finance manager Imtyaaz Mohamed says his dealings with VBS Bank were above board, with the full knowledge of party leaders.
News
3 years ago

"The then PEC of ANC, led by comrades Stan Mathabatha and Knox Seabi, tried to intervene but, it has since proved to be fruitless.

"The REC, in its wisdom, took the decision to allow the council to approve the mayor's recommendation to reshuffle her executive committee with intention of bringing stability in the municipality as the three exco councillors would always give frivolous apologies for not attending the meeting while fully knowing that some opposition members party would also not attend."

Moremi-Taueatsoala said the REC further mandated the officials to convene a meeting with the councillors in question to advise them to resign as exco members to avoid embarrassment, but only one councillor acceded to that advice and resigned.

Mogalakwena mayor Andrina Matsemela said the council decided to reshuffle the exco following the performance assessment of the municipality on how it carried out its constitutional mandate over the years.

In a statement, Matsemela said she was moving the exco members to different portfolios and none of them were fired but were reduced to ordinary and proportional councillors' status.

The ANC in Limpopo is hard at work trying to replace the sacked mayors linked to VBS Mutual Bank.
News
3 years ago