Angry residents march in Mokopane to demand that mayor resigns 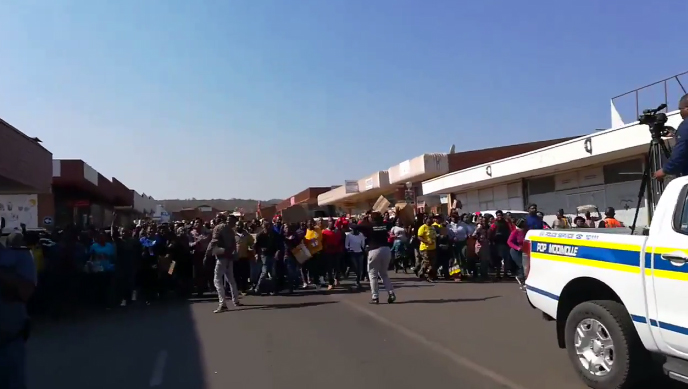 Angry residents of the embattled Mogalakwena local municipality have shut down Mokopane town in Limpopo to demand the resignation of the mayor and the entire council.

This follows the killing of councillor Valtyn Kekana and ANC Mogalakwena sub-region secretary Ralph Kanyane, who were shot in a suspected hit during broad daylight last week.

Scores of residents marched to the municipality to submit a memorandum of demands to the mayor and also to the police to speed up the investigation.

South African National Civic Organisation (Sanco) sub-region secretary Sasa Tlou said they demand that mayor Andrina Matsemela resigns with immediate effect because she has led a corrupt municipality which fails to provide services to the people.

However, the memorandum was only read out as Matsemela was not at work and residents refused to submit it to any official other than the mayor.

A fight broke out in the chambers of the Mogalakwena municipality in Mokopane, Limpopo, on Tuesday after a group arrived at the municipal offices and ...
News
3 years ago

More than R2m meant to pay service providers of a struggling Limpopo municipality was somehow mysteriously misdirected to "unintended recipients".
News
3 years ago

In the memorandum Tlou said the municipality must operate consistently with fully qualified officials.

"Nepotism is the order of the day in the municipality and municipal funds are unaccounted for.

"And the council is divided into three groups hence service delivery is affected," read the memorandum.

Tlou said the shutdown would continue until their demands are met.

He said minister of police Bheki Cele should come and fire corrupt police officers at the local station.

Some of the shops were closed as residents marched to both the municipal offices and police station.