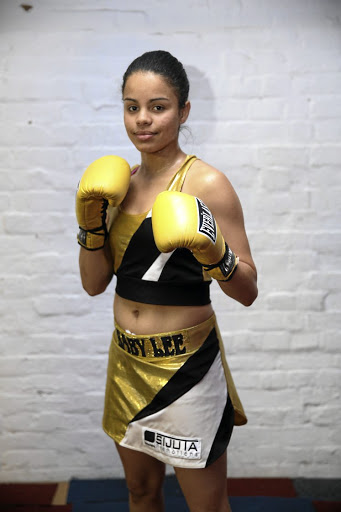 Above all, she was a champion sportswoman, so many gifts for a young lass who was killed by someone she loved before.

Both print and electronic media are inundated with sombre tributes and messages of condolences to her family.

I made her acquaintance in the year 2013. Veteran boxing trainer Vido Madikane invited me to his famous Downtown boxing gymnasium in Quigney, Eastern Cape.

Uncharacteristically, he was effusive and exuberant when he told me that he was about to unleash a juggernaut in the women's boxing circle.

Drawing from martial arts jargon, he said the girl-child was the snake and the eagle in one package.

On sparring day I arrived at the gym as promised. I watched Vido and Baby-Lee working on the pads, I was mesmerised. I was in awe of the blinding hand-speed.

Goodness me, there was timing rhyme and rhythm in all her movements. I marvelled at her coordination of upper body and lower body movements.

I locked the doors and Vido closed all the windows. The phenomenon that was Leighandre Jegels was unravelling in front of us.

So far the focus has been on women who are mostly at the receiving end of gender-based violence but the SACP believes that focus should also be put ...
News
2 years ago

I was transfixed, I was bemused, I was enchanted. Madikane was beaming from ear-to-ear, prancing and dancing around the ring. It was the stuff that only dreams are made of.

It is an established fact that Baby-Lee was a proud product of Boxing SA's Women in Boxing flagship project. She was a child of the martial arts.

She bestrode the world of karate and the vast universe of the boxing family. A champion karateka and a champion boxer - a rare breed indeed, a gift from God the Almighty.

Her stunning performances inside the ring raised the competitive levels of women's boxing in the country. She was a source of inspiration to other girls who would aspire to follow in her footsteps.

In less than five years as a professional boxer, she captured the attention of boxing connoisseurs and historians alike. The boxing world was her oyster... she will be sorely missed.

The ballad of Baby-Lee is an unforgettable story of a child prodigy who arrived on boxing like a breath of fresh air. She set the scene on fire and catapulted existing performance levels to dizzy heights.

President Cyril Ramaphosa has announced a government plan to fight against gender-based violence. Ramaphosa announced his plan yesterday in the ...
News
2 years ago

A baby-faced assassin who slayed every opponent on sight. A sprightly young girl blessed with a ballerina figure and TNT in her fists.

She loomed large in boxing circles, heir-apparent to the great Noni Tenge. She would blossom into a dominant figure in women boxing circles at home and abroad.

She was a poster-girl for women in sport. In the stultifying cauldron of professional boxing, the Jegels family's love and support for Baby-Lee was just amazing. Both parents were always with her at the gymnasium.

They would always accompany her to all boxing tournaments. This abiding love and care was essentially the wind beneath her wings.

She was a pioneer, hers was a heroic and titanic life. May her soul rest in everlasting peace.

Leighandre will be laid to rest in East London on Saturday. Hamba kahle Nkosazana!

*Radu is BSA board member

On Monday night as students on various campus held night vigils for University of Cape Town student Uyinene Mrwetyana, who was murdered by a man, the ...
Opinion
2 years ago
Next Article