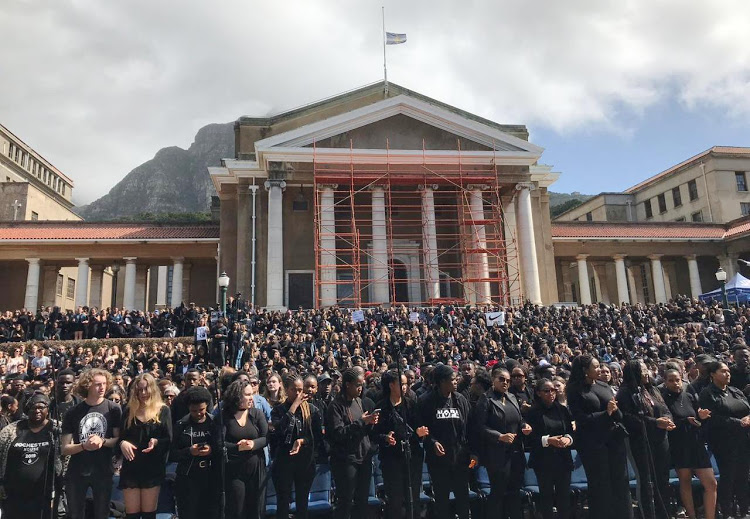 Schools across South Africa have this week taken a stand against rape and femicide.

The country has been rocked by gender violence this week with many more victims coming forward.

The murders of first-year University of Cape Town student Uyinene Mrwetyana and boxer Leighandre Jegels in the Eastern Cape sparked the outrage. UCT turned out in force on Wednesday to remember their murdered student. On Thursday evening‚ President Cyril Ramaphosa announced a raft of measures he would discuss with Cabinet to curb women abuse.

From Pinetown Girls’ High School in KwaZulu-Natal to Rondebosch Boys' High School in Cape Town‚ pupils from all corners of the country have banded together against violence against women.

"Our girls have been deeply affected by these events and we are so proud of how they have come together in their silent but very moving protest. It is unacceptable that girls are afraid to leave their homes‚ walk down the streets and play an active role in society‚" Johannesburg's Parktown High School for Girls said.

To show support for the campaign‚ the high school pupils wore black to school on Friday.

"In addition we are very aware of the increased instances of xenophobic violence that are playing out in the streets of Johannesburg as well as all over social media. We also condemn these hate crimes against our fellow humans.

"We are very aware that many of our girls have been directly affected by this violence and they do not have safe passage to school. We ask that they do not put themselves in danger by coming to school if it is not safe."

Grey High School for boys in Port Elizabeth illustrated their support with placards which read: "#It'sTime"‚ "#NoMeansNo" and "#EnoughIsEnough".

Eunice High School for Girls in Bloemfontein also held a day of mourning‚ standing in solidarity with other schools.

But a parent from Randpark Ridge High School in Johannesburg said she was taken aback when her family's efforts to honour victims of gender-based were rejected by the school.

The parent said that a pupil at the school had started a petition aimed at showing solidarity with victims. She said she took it upon herself to alert the management of the school that her daughters would dress in black on Friday.

"I sent an e-mail to my children's grade tutor explaining why my girls will be wearing black‚ along with why I find this important. I was then called by the principal's secretary to tell me that under no circumstances will the children be allowed any civvies as they become disruptive. Should my kids turn up to school in black clothing‚ they will be sent home‚" she said.

"I am very frustrated. I understand they are children‚ but I don't see why they should not be allowed to show solidarity. Our children are getting raped and murdered daily‚" she said. "The school has told the learners that they won't be allowed to wear black or have a peaceful silent protest in solidarity with victims of gender-based violence. Instead they may wear a ribbon and will observe a minute of silence‚ but the ribbon should be concealed."

The Gauteng department of education had also not responded to requests for comment at the time of publication.