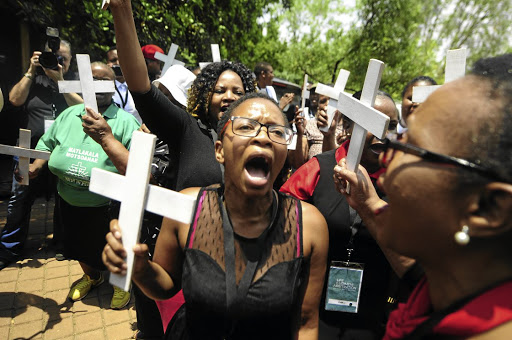 Families of mentally ill victims who died protest outside the Life Esidimeni arbitration hearings in Johannesburg last year. The SIU is taking nine NGOs to court over the tragedy.
Image: THULANI MBELE

The Special Investigating Unit (SIU) is instituting civil action suit against the owners of nine non-governmental organisations involved in the Life Esidimeni tragedy.

SIU says the value of the pending civil litigation is R5m.

Spokesperson Nazreen Pandor said the unit will ensure that action was taken against the NGOs and consequence management meted out against officials implicated.

"We intend to complete this investigation in three months time to be able to submit a final report to President Cyril Ramaphosa," Pandor said.

On Friday, the unit announced it had ordered two Gauteng service providers who benefited from Life Esidimeni to repay R600,000 to the state.

It follows a successful order granted in relation to the Life Esidimeni investigation against the Anchor Centre for the Intellectually Disabled and Dorothy Evangeline Franks.

It was discovered that the two service providers continued to bill the Gauteng health department long after the patients were removed as per the directive of health ombudsman Prof Malegapuru Makgoba.

Pandor said the unit was now executing on the judgment and any money received will be paid to the department.

ANC government must build a capable and trustworthy state

"President Ramaphosa issued a proclamation last month mandating the SIU to investigate matters in respect of the Gauteng department of health. The unit instituted civil litigation in the Gauteng High Court Division.

"The two service providers applied delaying tactics, but the matter was finally heard on July 17 for the payment of R663,275 plus costs," Pandor said.

She said judgment was granted against the defendants to pay the amount and SIU will ensure that the money was recovered and returned to the department.

The DA welcomed the court judgment, with its spokesperson for health in the province, Jack Bloom, saying he hoped that criminal charges will also be laid against people who fraudulently obtained the payments.

"It highlights the administrative ineptitude of the department as they paid over money even though they should have known that the patients had been transferred elsewhere," Bloom said.

"I am concerned, however, at the slow progress in charging those whose criminal negligence led to 144 deaths of mental health patients in their care."