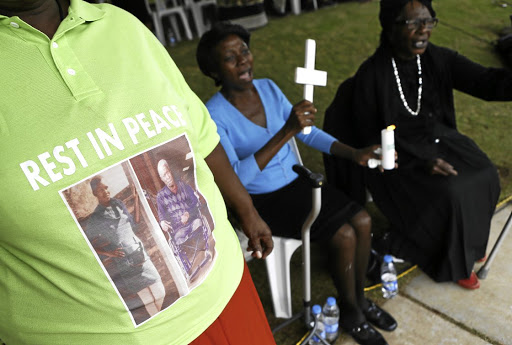 Family members of various Life Esidimeni victims sing in remembrance of their loved ones. /Phill Magakoe

The Gauteng government wants to recoup more than R1.8m that was overpaid to NGOs implicated in the Life Esidimeni tragedy.

The provincial department of health has so far charged six senior officials with financial gross misconduct for their role in the Life Esidimeni saga.

Khutso Rabothata, spokesperson for Gauteng health MEC Gwen Ramokgopa, said the six officials' cases were among 133 cases of misconduct and corruption being investigated within the department.

"Matters relating to the Life Esidimeni mishap led to a chief director and five officials to face charges of gross financial misconduct resulting from incorrect certification, approval and payment of invoices that led to the department incurring financial losses," Rabothata said.

The family of one of the five previously unaccounted-for Life Esidimeni mentally ill patients who were recently located by the Gauteng health ...
News
2 years ago

He said the Special Investigating Unit (SIU) was in the process of recovering R1.8m worth of monies which were overpaid to NGOs involved in the scandal.

During the Life Esidimeni arbitration hearings into the deaths of 144 psychiatric patients, then deputy director for mental health services Hannah Jacobus confessed to having signed off illegal NGO licences.

Meanwhile, Rabothata said other cases being investigated at the department include 7,050 employees found to have been conducting work outside the public service, while 205 officials were alleged to have been doing business with the state.

About 54 officials had apparently taken leave and claimed overtime from the department for that time.

"To date three deputy director-generals were disciplined for irregular expenditure. In addition, one chief director and a director have already appeared before a disciplinary committee on charges of insubordination and financial misconduct. The hearing is still ongoing," he said.

Rabothata said some officials were charged with deliberate sabotage of the department's ICT system, theft of medicines, irregular appointments and other forms of fraud.

Yesterday DA shadow MEC for health Jack Bloom said it was concerning that cases of corruption at the department were piling up with some issues dating to as far back as 12 years.