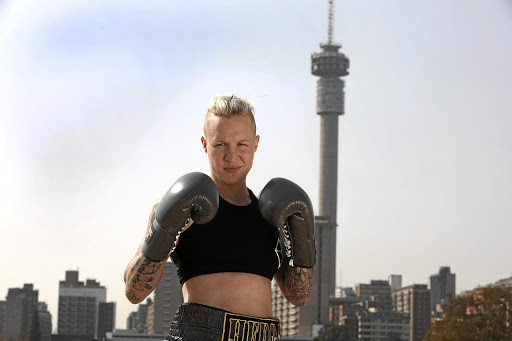 "Every day is Women's Day and every month is women's month."

That is how newly-crowned South African junior welterweight female boxing champion Hedda "Shredder" Wolmarans views August which is celebrated annually as the Women's Month in SA.

Wolmarans spoke to Sowetan shortly after being crowned a champion on Sunday, after Nomandithini Ndyambo from Phumlani in the Eastern Cape retired on her stool just before the second round.

Ndyambo had absorbed two well executed body blows and the writing was on the wall during the break that she was not going to come out of her corner. She was grimacing in pain.

Their bout was scheduled for 10 rounds at Presley's in Boksburg on the East Rand.

The tournament - dubbed Power to Women - was coincidentally staged by a female promoter Thembekile Klaas.

Her event is the first this year to welcome Women's Month.

The title fight between Wolmarans and Ndyambo topped Klaas' seven-bout card which attracted a big crowd.

That on its own was a recognition to females in the historically male-dominated fistic sport. Even the referee was a woman.

That is because female boxers fight scarcely despite the plea by Boxing South Africa to promoters to include one or two female bouts in their tournaments.

The talented Wolmarans from Auckland Park in Johannesburg remains undefeated as a boxer after five professional fights.

"Her body was open; I just nailed it; I saw that she was carrying a bit of weight there.

"You never know how far a fight will go. I prepared to the best of my ability. I've never been this fit... I think I gained more from the preparations than the fight. I was expecting a longer and tough fight."

When asked what message she had for women, the outspoken fighter said: "Well, every day is a Women's Day and every month is a Women's Month. I am very happy to have been crowned the SA champion."