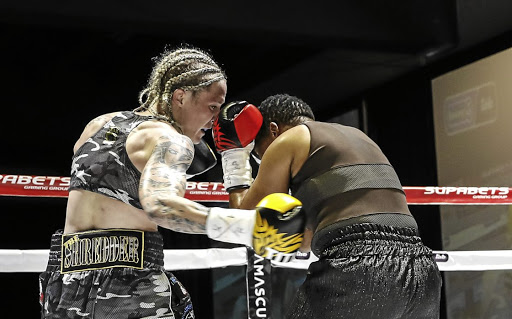 Hedda "The Shredder" Wolmarans proved beyond any reasonable doubt that her points victory against Ndobayini Kholosa over six rounds at Turffontein Racecourse in March was not a fluke as she easily outclassed Kholosa over the same number of rounds at Joburg's Portuguese Hall on Saturday.

Ushered to war by trainer Colin Nathan, Wolmarans boxed brilliantly behind her stabbing right jab, using her height to keep the slightly shorter Kholosa at a distance.

Wolmarans even dropped Kholosa in a rematch that turned out to be easier for Wolmarans than their first fight, which was closely contested.

Kholosa out to avenge disputed loss

KwaZulu-Natal boxing trainer Samson Ndlovu is still seething over the points decision victory that favoured Hedda Wolmarans against his charge ...
Sport
3 years ago

Kholosa's gallantry from the first clash, which saw the two female fighters earn themselves an extra R5000 each on their purse, was missing on Saturday, however.

Even her trainer Samson Ndlovu, who had issues with the result of the first fight, admitted that Wolmarans was the better boxer and deserved to win.

"We lost clean and I am not complaining," Ndlovu said. "We had enough time to prepare this time but we just could not get closer to her."

Nathan said: "Look, the difference this time is that Hedda fought behind her jab, while in the first fight she allowed Kholosa to fight in the pocket.

"We knew what to expect from her and our game plan was to frustrate her with a jab, move side to side while letting go her arms. Kholosa could not come close."

In another bout, Mike Schutte jnr suffered a technical decision loss in the fourth round to Congolese Danny Ngokwey.

Schutte, who was ahead on points, started vomiting early in the fourth round and was unable to continue with the bout, which was his second boxing match.

The tournament attracted a big crowd. There were disturbing moments in some bouts, which resulted from some ring officials' failure to stamp their authority.