Promoter on the hunt for female boxers 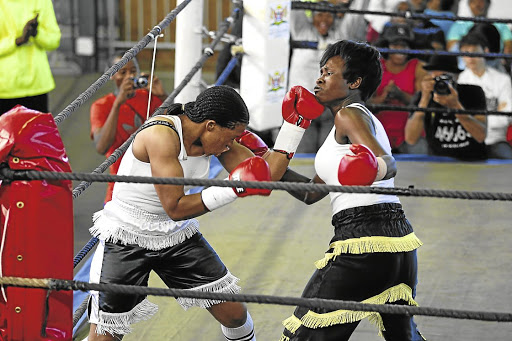 Shereen Hunter is on a mission to assist in the production of female boxing stars.

She is the female professional boxing promoter whose sterling job in a short space of time earned her Boxing South Africa's (BSA) Most Promising Promoter of the Year Award in January.

Hunter, who trades under the banner of Unleashed Combat Sport, says that is the reason she has topped her bill for Saturday with a female bout.

Adversaries Ndobayini Kholosa from Kanana in Klerksdorp, North West, and Hedda Wolmarans from south of Johannesburg, will headline Hunter's card at the Portuguese Hall, south of Joburg.

Interestingly, the two females boxers have an axe to grind following their topsy-turvy six-rounder in March.

Kholosa, the SA lightweight champion who is trained by Sam Ndlovu, took that fight three days closer to the date, but you could not tell by the manner in which she fought her heart out.

On the other hand, Wolmarans - who is trained by Colin Nathan - could also have been affected by the late change of her opponent, but she gave her best to be adjudged the winner at the Turffontein Race Course.

Said Hunter: "We need to come together and be realistic in our approach to get female boxing off the ground. Look promoters, both male and female who have been there before me, have done their best to do that and, thankfully, BSA is very much supportive.

"But I still believe it can get better. We must do more. Featuring girls in our tournaments will motivate that young girl out there to come to this wonderful sport, be it as a fighter, referee, judge or administrator."

Women are gradually invading the historically male-dominated sport. It all began with Muditambi Ravele, the first female to be chairperson of BSA, while Cindy Nkomo is chief operations officer.

There will be seven more bouts and action will begin at noon.