Tenge ready to conquer the world 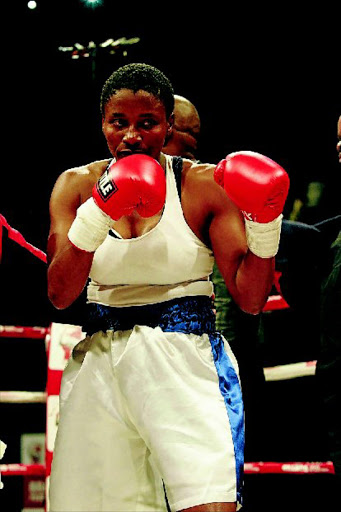 ON TOP OF HER GAME: Noni Tenge won the WBF belt on Friday night in Pretoria in an all-women tournament PHOTO: BAFANA MAHLANGU

Noni Tenge took a step closer to confirming herself as the next opponent for undisputed WBA, WBC, IBF and WBO welterweight champion Cecilia Braekhus by winning the WBF belt at the weekend.

The unanimous points win should put the WBA championship committee under pressure to mandate the Norwegian boxer to face Tenge.

The No 1 spot is vacant and Tenge - the former undefeated IBF and WBF holder from Mdantsane, Eastern Cape - occupies the No 2 position.

The country's wonder girl decided to keep active by dusting off the cobwebs against Tshabalala for the WBF strap.

Tenge bettered her record to 15 wins, a draw and a loss to American Layla McCarter in 2012.

"I have learned to be patient in this game, so I will wait but time is fast running out on me," said the 35-year-old, who won her third world boxing belt on Friday.

But the venomous punching which turned New Zealander Daniella Smith pink when Tenge ended her reign as the IBF holder in Brakpan in 2011, was missing on Friday.

Although Tenge looked good physically- she boxed beautifully and showed great maturity by painstakingly working behind a jab - she only began dishing out her usual impressive performance in round six.

Tshabalala was forceful in the first three rounds, rocking Tenge with thunderous rights but not with enough lightning to cause damage.

The bout of the evening was the SA junior flyweight championship between holder Nozwelethu Mathonsi and Nthabiseng Didi.

Mathonsi had to dig deep into her reserves to retain her belt against Didi.

The latter showed great talent and a big heart, forcing the champion - who was involved in her seventh bout - to go the full distance.

Rita Mrwebi finally defeated Esther Mashiya - who had beaten her in all their previous three bouts - on points over 10 rounds.

The all-women tournament was staged by female promoter Mbali "Don Queen" Zantsi in conjunction with the department of sport and recreation and Boxing South Africa to mark the 16 Days of Activism for No Violence Against Women and Children campaign.