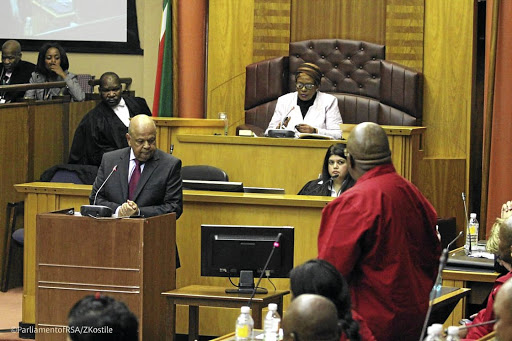 This was after a commotion broke out when the MPs disrupted Gordhan, saying he should not address the House as he is a "constitutional delinquent". They were then asked to leave the House but refused, prompting security to be asked to escort them out, after which a scuffle broke out.

Public protector Busisiwe Mkhwebane found that Gordhan violated the constitution when he allowed the so-called "rogue unit" to operate at the SA Revenue Service (Sars) during his tenure as the tax agency's commissioner.

Gordhan yesterday said he's "surprised" that there are those who are seeking to "equate me to people" who stole billions of rands of public money at state- owned companies.

The man hoisted a placard and shouted "fees must fall" while the president was addressing the house.
News
3 years ago

He was responding to questions from journalists in parliament ahead of the budget vote.

The journalists, among others, wanted Gordhan to explain why he had cited the office of the public protector and Busisiwe Mkhwebane as separate entities in his court papers seeking an interdict to the remedial of her adverse findings against him over his role in the establishment of the Sars rogue unit.

Before responding directly to the matter, Gordhan said he was taken aback that there were some who sought to portray him in the same light as those accused of large-scale looting of public funds.

Gordhan said challenging Mkhwebane's reports against him did not amount to a refusal to be held accountable.

"I'm surprised that you want to equate me and the investigations that the public protector ... is investigating, to equate me to people who committed R7bn fraud at Transnet or cooked-up the optimum coal supply chain at Eskom, or agreed to the kind of deals they did with McKinsey or what they did to the revenue service. There's no equation between the two."

'We can’t please everyone,' Mkhwebane tells MPs at fiery meeting

Public protector Busisiwe Mkhwebane has told parliament that no matter what her office did, someone would be unhappy.
News
2 years ago

He was "absolutely confident" he still had the full backing of President Cyril Ramaphosa and his cabinet.

"We've already had instances of that over the recent past, the last five, six, seven years ... so we seem to have short memories about state capture," Gordhan said.

The former finance minister said Mkhwebane had also relied on fake reports to arrive at her findings against him and had failed to provide legal reasons why she had decided to probe Sars rogue unit from seven years ago, as required by the Public Protector Act.

"In fact, the public finds it quite ridiculous that something that might have happened seven, eight or 10 years ago is now revived in a systematic way, at the behest of the same individuals, in order to make sure, which is to fix SOEs, is interfered with ... and the question is why the interference with this business we have to do?"

Pravin Gordhan does have a pharmacy degree: UKZN

Public enterprises minister Pravin Gordhan graduated with a pharmacy degree from the University of KwaZulu-Natal (UKZN)‚ the institution confirmed on ...
News
2 years ago

EFF calls for Ramaphosa to fire Gordhan with immediate effect

President Cyril Ramaphosa must fire public enterprises minister Pravin Gordhan from his Cabinet with immediate effect for his role in the ...
News
2 years ago
Next Article