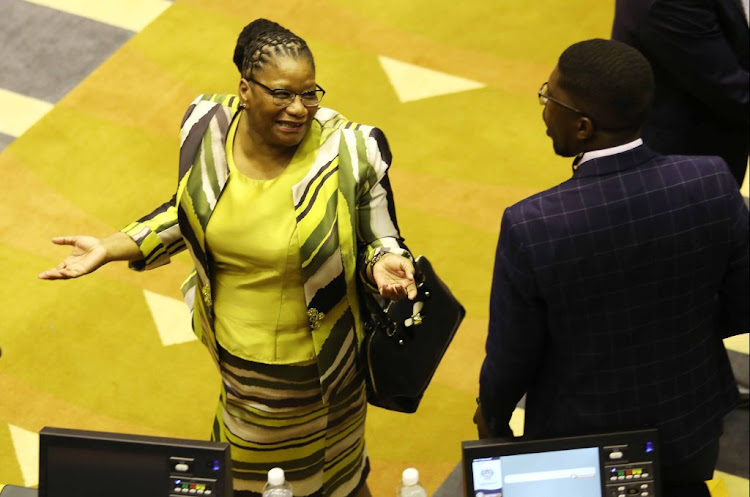 Thandi Modise was elected the new speaker of the National Assembly in Cape Town on May 22 2019.
Image: Esa Alexander

In an unprecedented step, one of parliament's most powerful presiding officers has been nominated to serve on the Judicial Service Commission (JSC), a body that appoints judges and disciplines those behaving badly.

This comes after National Assembly Speaker Thandi Modise was nominated by ANC chief whip Pemmy Majodina as one of the party's three preferred candidates to serve on the JSC along with three other MPs from opposition parties.

In terms of section 178 of the constitution, the National Assembly has to be represented on the JSC by six MPs, with three of them drawn from the ANC and the balance from opposition benches.

Majodina also announced Modise as the ANC's preference to represent it on other important legislative bodies such as the Pan-African Parliament (PAP) and the SADC parliamentary forum, despite her busy schedule as speaker of the National Assembly.

EFF chief whip Floyd Shivambu said while they did not oppose her nomination to sit on the JSC, it would be impractical for Modise to do justice to all these deployments on top of her full-time job as speaker.

'No warrant of arrest' for Modise skipping court date

There is no warrant of arrest for National Assembly speaker Thandi Modise, her office said on Friday. This comes after reports that the regional ...
News
3 years ago

"Honourable speaker, you will realise when you have to sit in the PAP, in the SADC parliamentary forum and the JSC that it's not practical in terms of schedule. You won’t be able to sit in three deployments and still be the speaker of the National Assembly. Whatever happens, you're going to compromise either of the four major responsibilities. I think that the ANC caucus must have to relook into it," said Shivambu during a vote on the matter.

ANC deputy chief whip Doris Dlakude said they were aware what it meant to have Modise deployed to all these four critical structures.

"We will attend to it as the ANC, thank you so much," said Dlakude.

For his part, DA chief whip John Steenhuisen made light of the moment, opting to mock the EFF.

"Madam speaker, in terms of [house] rule 85 I think it's reflection on your ability to be multi-tasker, but also for the sake of consistency this is the thing about the EFF, they came here just now and said you won the election, you must put up whatever you want and now they've got a different view. It's Pravin [Gordhan] one day, no Pravin the next day. It's Busisiwe Mkhwebane one day, no Mkhwebane the next day, speaker one day, no speaker the next day," said Steenhuisen.

Modise then told MPs that she's personally raised the matter with the party leadership.

"Honourable members, can I close this matter. Indeed this matter, almost raised in the same way by honourable Shivambu, has been raised by yours truly and it's under discussion. So the ANC will come back on this matter," said Modise.

Legal expert Paul Hoffman said while it was unprecedented for a speaker to serve on the JSC, there was nothing in law precluding her from doing so as the composition of the JSC accommodated politicians in terms of the constitution.

Hoffman said he too was concerned about how it could compromised Modise's responsibilities as a speaker.

"Practically speaking, you would think that the speaker's job is so big that she would not have time to sit on the JSC, because you're meant to read huge files of paper about the pedigree of each candidate and I don't know where she'd get time for that," said Hoffman.

"I would probably think that there's probably more reasons against it than there are for it. The reasons for it are that as an MP she's eligible and as a person who occupies an office which requires independence of thought and impartiality in decision-making, she's correct. But the reasons against it are that the speaker's job is so big that it should require full-time attention from the incumbent in order to have the job done properly.

"And the role of a parliamentary nominee from a political is to represent the interest of that political party on the JSC, it means that she will be wearing a different hat when she sits in the JSC and she already has a very big hat as speaker. it's unprecedented, I've never heard of a speaker being on the JSC."

Parliament to probe 'unbecoming and uncharacteristic' conduct of MPs after fracas

Parliament is going to investigate the “unbecoming and uncharacteristic” conduct of MPs after they clashed on Wednesday during an induction session.
News
3 years ago

Baptism of fire for first-time political parties in parliament

Two of the smallest parties in Parliament got a baptism of fire when they were told to watch their tone in a heated debate on the allocation of time ...
News
3 years ago
Next Article